NASA shared a photo of a cosmic dance between two stars that triggered thermonuclear explosions in deep space. The shock waves emitted from the blasts produced a gorgeous light show captured by NASA's Chandra X-ray Observatory.

Astronomers and scientists are eagerly awaiting the moment that NASA's James Webb Space Telescope will be ready to produce its first images of deep space. The telescope is currently in its final orbital path and completing the final steps of preparation. A recent study has also proposed a potential "Interstellar Probe" that would travel 500 astronomical units from the Sun to study and measure dark matter. But as we wait for the first photos from the Webb Telescope, and possible future missions that will travel even further into space, we have plenty other instruments that are already delivering astonishing photos and data.

A photo shared by NASA showcases a white dwarf and a highly variable red giant. As they orbit one another, the white dwarf pulls material from the red giant onto its surface. Once enough of this material accumulates, it triggers an explosion. NASA used imagery from the Hubble Space Telescope (red and blue colors) along with X-ray data collected from the Chandra X-ray Observatory (purple color) to produce the photo above. The picture illustrates how a jet from the white dwarf is striking material surrounding it and producing shock waves, much like sonic booms from supersonic planes.

The pair of stars, known as R Aquarii, is an interacting binary stary system, or two stars that appear to have a close symbiotic relationship. They are located approximately 710 light years away, and consist of a cool red giant star and a dense white dwarf star in mutual orbit around their common center of mass. Material in the cool giant star's extended envelope is pulled by gravity onto the surface of the smaller dwarf. The ultimate result is an eventual triggering of a thermonuclear explosion and discharging into space. The image shared by NASA represents the still-expanding ring of debris which traverses less than a light year. The blast would have been seen in the early 1700s. 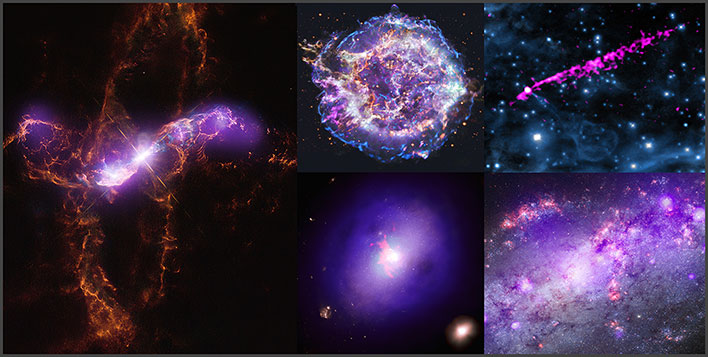 R Aquarii was first discovered by Karl Ludwig Harding in the early 1800s. He was originally searching for a missing planet between Mars and Jupiter as part of the "Celestial Police" project. While he did not locate the missing planet, he did discover the third asteroid, Juno, and four variable stars which included R Aquarii.

The photo is from a collection NASA shared previously that it says "provides an example of the ways that different types of light from telescopes on the ground and in space can be combined. The common thread in each of these selections is data from NASA's Chandra X-ray Observatory, illustrating how X-rays, which are emitted by very hot and energetic processes, are found throughout the Universe."

The thought of what types of photos will be produced once the Webb Telescope is operational is exciting to ponder. With a seemingly endless expanse of space left to discover, and so many questions yet to be answered, we can only wait to see what lies ahead.