Even if you're not a big gamer, you are almost assuredly familiar with Street Fighter. As a franchise it's one of the most important in gaming history, as the legendary classic Street Fighter II essentially defined the entire genre of 1-v-1 fighting game. Later titles have found success in their own right, and the series has spawned countless spinoffs and crossovers.

However, despite the revered status of the brand, Street Fighter V wasn't a huge success for Capcom. Divisive art-style changes and abusive monetization made for a rocky launch, while the game's technical issues continued for years, making online play painful for people living in regions with less-than-amazing internet connections (read: everyone trying to play online outside of Japan.)


Perhaps for that reason, Street Fighter 6 looks to be a huge departure from the previous title. The overall visual style is quite different, and the theme and tone of the marketing for the new game, at least so far, has been fresh and far removed from past Street Fighter series advertising. For the next game, as usual, every returning character is getting a makeover, but SF6 also seems to be bringing seven new characters to the table. 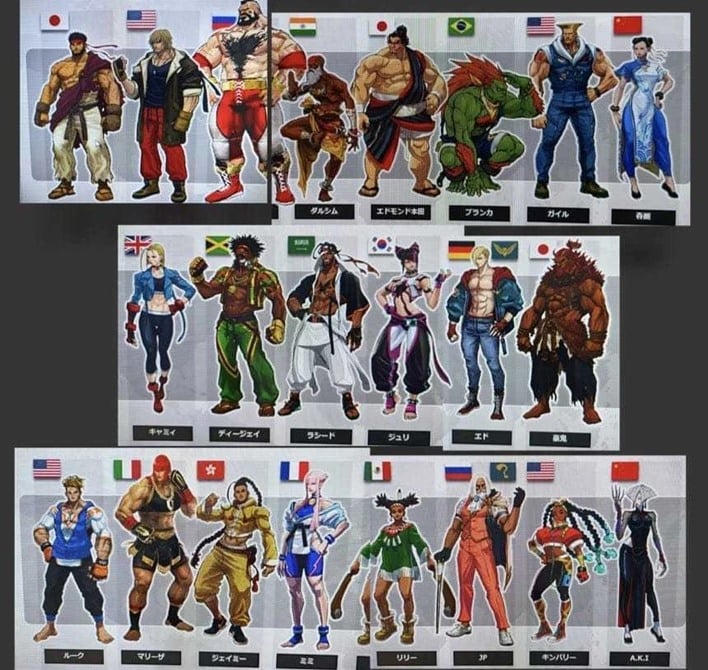 Capcom's only actually shown off a couple of the new characters, but we know there are at least seven fresh faces planned because a Japanese netizen leaked a series of images showing hot new designs for each character along with the names and nationalities. The actual source of the images isn't completely clear, but they look like they're from some sort of promotional material, or perhaps a strategy guide.


As far as the roster itself goes, well, it looks pretty heavy on the fan service. Longtime players will be pleased to know that all eight of the original World Warriors appear—a first since Street Fighter IV. However, the original boss characters from Street Fighter II, known internationally as Sagat, Boxer, Claw, and Dictator, are absent.

In their places are a smattering of fan favorite characters from across the series, including Akuma, Cammy, Dee Jay, Juri, Ed, Rashid, and Luke, who was the last DLC character added to Street Fighter V. These characters are generally the ones who saw the most dramatic redesigns, with each character retaining iconic elements but sporting fresh new fits.
The seven new characters are Italian brawler Mariza, a martial artist from Hong Kong named Jamie, a French woman named Mimi, a cute African-American fighter named Kimberly, a white-haired Russian man simply called JP, a Mexican lady warrior named Lilly, and a mysterious Chinese woman named A.K.I. that may not be human.


Assuming that this is the launch roster—and assuming that none of these characters are day-one DLC—this would be the largest launch roster for a full-number Street Fighter game to date. There are reasons to doubt this information, though. Several characters appear in the new trailer revealed during the PlayStation State of Play livestream on Thursday that don't appear in these materials, including Birdie and an unnamed student of Chun-Li's that may be Li-Fen, from Chunners' Street Fighter III ending.