The Capcom Pro Tour fighting game tournament just wrapped, and at the end of the fights last night, the series' host dropped an announcement that was news to absolutely no-one that pays attention to these sorts of things. As expected, Street Fighter 6 is on the way, and along with the announcement, Capcom released a teaser trailer of sorts. You can view it below.


Even people who don't play Street Fighter probably recognize Ryu, the Japanese karate fighter who dates back to the very first game in 1987. The other fighting fellow in the trailer is Luke, who makes a stark (and probably quite intentional) contrast against Ryu as the newest character to the series. Luke debuted as the last DLC character for Street Fighter V this past November, meaning he's only been a World Warrior for about three months at this point.

There's really very little to say just yet about Street Fighter 6. The visual style in the trailer makes callbacks to both Street Fighter V as well as the ink-blot style of Street Fighter 4, and the music reminds of the older game, too. Series producer Yoshinori Ono isn't on this one, so it could be a significant departure from previous titles. The visuals in the trailer look slick, but there's no telling if they bear any resemblance to the in-game graphics or if they're just hand-made CG.


The Street Fighter 6 announcement coincides with the 35th anniversary of the series, as well as the announcement of another Capcom release: Capcom Fighting Collection. This all-in-one package, coming to all current- and previous-generation platforms, comprises a whopping ten classic fighting games including two that never made it to Western shores, plus the very first home release of fighting-RPG boss-rush hybrid title Red Earth, known overseas as Warzard. The full list of titles comes after the tweet, below: 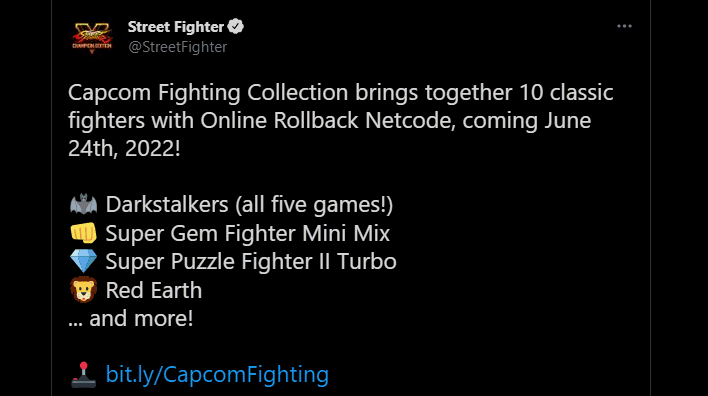 As a fan of the Darkstalkers (or "Vampire," as it's known in Japan) series, this writer is slightly saddened to see that the Dreamcast's mash-up title Darkstalkers Chronicle isn't included, but it's still awesome to have perfect arcade versions of all five original games. Even better than perfect, in fact, because these versions have been modified to include online play with modern roll-back netcode.

The bundle of games also includes "a treasure trove of art and music," with box art, concept art, design documents, and "more than 400" music tracks available for hardcore fans to enjoy. Capcom says that Capcom Fighting Collection will be available everywhere on June 24th of this year, but further information about Street Fighter 6 will have to wait until the summertime.