The top selling "game" on Steam is not actually a game at all, but Valve's in-demand Steam Deck handheld PC. It occupied the second spot last week (for the fifth week in a row), just ahead of Elden Ring but below Lego Star Wars: The Skywalker Saga, but this week ascended the throne and managed to snatch the crown all for itself.
These rankings, as tracked by SteamDB, are based on how much revenue a particular title (or in this case, a hardware device) generates each week. Here's the breakdown for last week (through April 17)... 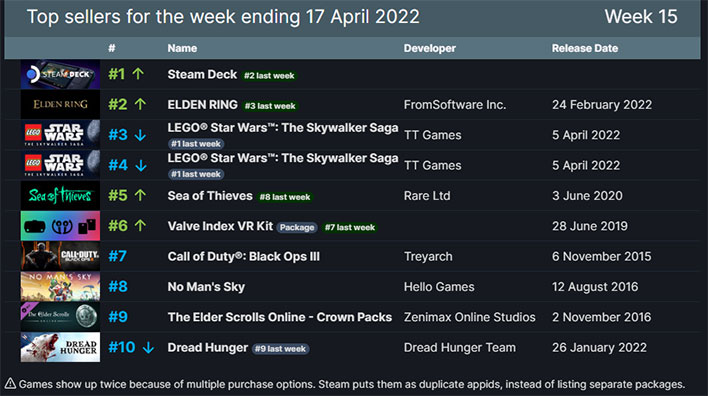 The Steam Deck had been stuck in second place for over a month and finally was able to climb up to the coveted No. 1 spot. Of course, it costs more than any of the games on the list, and that obviously plays a big role—it runs $399 for the 64GB eMMC model, $529 for the 256GB NVMe SSD model, and $649 for the 512GB NVMe SSD model.
It's still a notable achievement, though, and for a couple of reasons. For one, Elden Ring is a massive success, having sold over 12 million copies in the first 18 days. That's across all platforms, not just PC. But it's also had several more weeks of sales. It's not clear how many copies have been sold on Steam, though we can reasonably assume it's a lot.
Secondly, any worries the Steam Deck would flop have officially been squashed. It was never a given that that the Steam Deck would be a success, and we've seen failed attempts by Valve at having an impact in in PC hardware before, namely with its Steam Machines initiative. That never went anywhere.
In contrast, there's a waiting list for the Steam Deck—you can reserve any of the three models, then have to wait until "October 2022 or later" for it arrive. It's also telling that Valve is already planning a Steam Deck 2. That's off in the distance, but definitely something Valve is around thinking about, in terms of what features to offer and how powerful it should be.
As for topping Elden Ring in revenue, here's some fun math. If we take the average price of all three Steam Deck SKUs, we get $526.67. Then divide that by $59.99, which is how much Elden Ring costs, and it comes to 8.76. So in essence, every nine copies of Elden Ring sold brings in the same amount of revenue as each Steam Deck, roughly speaking.
Very roughly, actually—we don't have data on the breakdown of Steam Deck SKUs sales. On top of that, Elden Ring Deluxe Edition runs $79.99 on Steam. But hey, we have to work with what the data available, and our formula probably puts us in the ballpark at least.
We also do the same for Elden Ring's two SKUs—if the take the average price ($69.99) and use that instead, we're looking at 7.5 copies sold to generate the same amount of revenue as each Steam Deck. Which again is another rough estimate (unless I messed up the math anywhere along the way, which if I did, I'm sure the comments will let me know).

Anyway, it will be interesting to see if the Steam Deck can retain its position as the best seller on Steam.