Valve didn't need to go bonkers outfitting its Steam Deck with ultra high-end hardware, it just had to ensure smooth gaming on the handheld's 7-inch IPS display with a native 1280x800 resolution and 60Hz refresh rate. And so it has a custom AMD Zen 2 processor with integrated RNDA 2 graphics. That's fine, but could the Steam Deck be modded to play games comfortably at 4K? Technically, it can be.
We say "technically" because there are multiple caveats involved. Nevertheless, ETA Prime demonstrated it is in fact possible in a nifty video posted to YouTube. In it, he cracks open the Steam Deck and removes the M.2 form factor solid state drive to free up the slot, because that's what he used to hook up an external graphics card.
This was necessary because there's no Thunderbolt port on the Steam Deck. For this mod, he picked up an ADT-Link graphics card dock that connects to the host system with an M.2 extension cable. It's not a particularly elegant solution, and for this purpose it's not really cost-effective either. But it does in fact work with some GPUs.

Originally ETA Prime intended to mod the Steam Deck with an external GeForce GTX 1650 graphics card, but it wouldn't work. Neither did a GeForce RTX 3060 or GeForce GTX 1060. Any NVIDIA graphics card he tried resulted in black screen.
He tested a few AMD Radeon cards with better success, and ultimately settled on the Radeon RX 6900 XT for this mod. Which again, this takes us beyond the bounds of practicality.
"Since I have the RX 6900 XT laying here I figured we'd go ahead and attached it to the Steam Deck. It's definitely overkill and with the GPU attached to the Steam Deck it's no longer a portable system. The first question is going to be 'Why?', and really it comes to down because we can," ETA Prime explains.
That's good enough for us. The other caveat, though, is the performance potential. After getting the Steam Deck up and running with an external Radeon RX 6900 XT attached, the handheld became a more powerful system capable of playing games at a 4K resolution. But then the 4-core/8-thread CPU becomes a bottleneck. 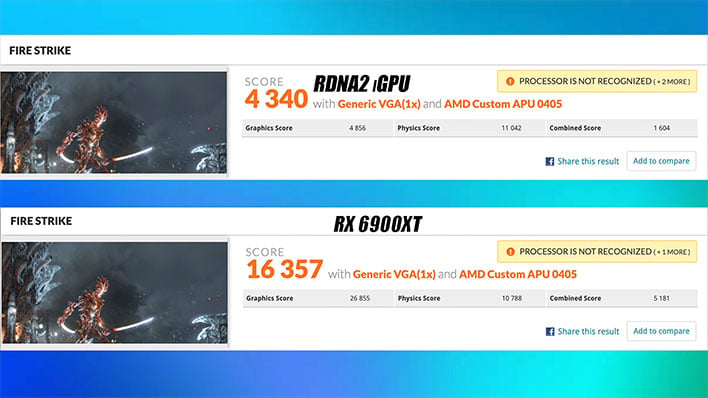 It's still a 4K gaming beast compared to an unaltered Steam Deck, with massive gains shown in 3DMark and topping 60 frames per second in games like The Witcher III and Grand Theft Auto V. However, not all games will actually perform better because of that pesky bottleneck. There's also a performance hit incurred from going through the M.2 slot.
Practical caveats aside, it's neat to see mods like. That said, if it's a more powerful Steam Deck you're after, hang tight for the Steam Deck 2.