Who doesn't like getting something for nothing? Sure, some things are so terrible that you might have a hard time even giving them away, but Star Wars Battlefront II: Celebration Edition is genuinely good these days, and also free right now at the Epic Games Store. The only problem is, so many people flocked to claim their copy that Electronic Arts is having a hard time accommodating them all.
Star Wars Battlefront II features both single-player and multi-player gameplay. Those who want to partake in the single-player campaign can hop right in and play the game without issue. However, the multi-player action has been overwhelming EA's servers, apparently, causing players to report seeing server errors (623 and 918).
EA says it is the result of an influx of users (understandable), and that it is in the process of adding more servers to the mix. 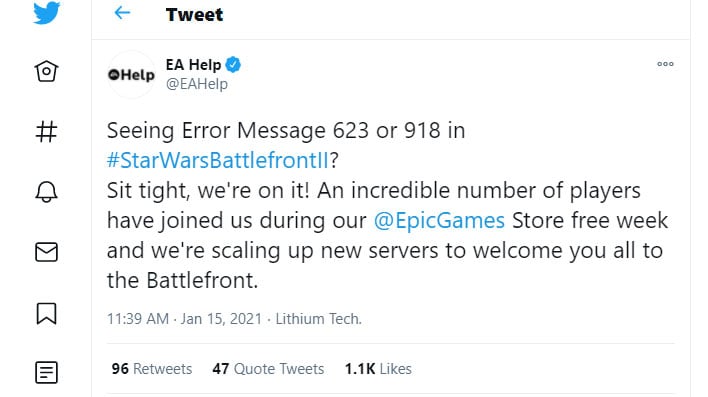 "Seeing Error Message 623 or 918 in Star Wars Battlefront II? Sit tight, we're on it! An incredible number of players have joined us during our Epic Games Store free week and we're scaling up new servers to welcome you all to the Battlefront," EA stated on Twitter.
Later that same day, EA posted another update saying the server capacity issue had been resolved. However, users still report running into connectivity issues, with a different server error code, that being 721. In one of EA's tweets, the company said server error code 721 "usually means the problem is on the servers' side."
To EA's credit, the company's EA Help account on Twitter has been super active and good about responding to users who are still unable to connect. However, it is not clear if EA is still adding more server capacity, or sitting back and hoping that things settle down after as the week goes on.
In the meantime, the game is still free. You can claim your copy from the Epic Games Store until 11:00am on January 21.