Sony has just released Spider-Man Remastered on PC, and it's shaping up to be its second biggest launch yet. Gaming database SteamDB shows more than 66,000 players were active on the game late on Sunday, putting the superhero action-adventure title within a few thousand of God of War, which remains Sony's biggest PC hit.

The game originally launched on the PlayStation 4 in 2019, making waves for its accurate depiction of Manhattan and stunning visuals. It was exclusive to Sony's platform, but it was successful enough that Sony opted to bring it to PC along with several other hit titles including, Horizon Zero Dawn, Days Gone, and the aforementioned God of War. Sony also plans to release Spider-Man: Miles Morales on PC.

Anyone who cared about games could not avoid seeing screenshots from Spider-Man in 2019—the game looked stunning on the PS4, and it's even better on PC. Sony's Nixxes development studio optimized the game for PC, adding ray-traced reflections on supported GPUs, as well as NVIDIA DLSS, DLAA, and an unlocked frame rate for sharper images. If you've got an Ultrawide monitor, the game also takes full advantage of that. Having played it ourselves over the weekend, we can confirm the game performs extremely well on PC.

Spider-Man launched on Steam August 12 for $60, and the following day it peaked at over 64,000 concurrent players. By Sunday, the peak was up to 66,436, according to SteamDB. As you might imagine, more people are playing on the weekends, and the interest decreases over time. Thus, Sunday's numbers could be the highest Spider-Man Remastered sees. That means God of War, which came to PC in early 2022, will likely retain its crown as Sony's most popular PC release. It attracted 73,529 concurrent players shortly after launch. 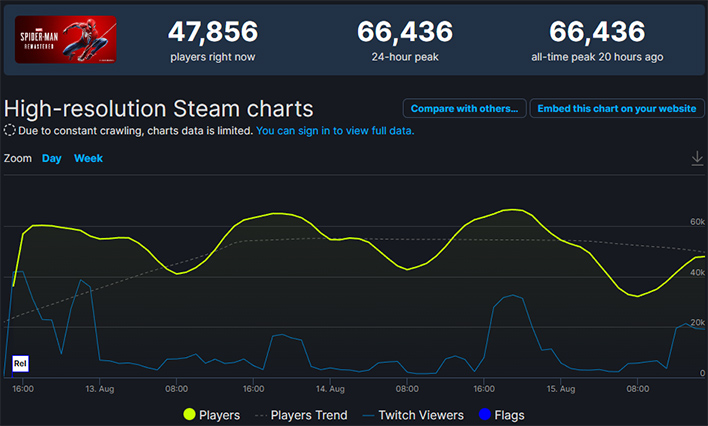 Bringing some of its most popular games to PC is a new initiative for Sony, and it plans to continue. By 2025, Sony hopes to have roughly a third of its games on PC. At first, that seems like it might be a bad thing for PlayStation 5 sales, but it is already selling every console it can make. Plus, PC releases are running a few years behind. Not only does this offer a new revenue stream, but it also increases interest in Sony's most popular franchises. If someone is going to try and track down a game console in this era of shortages, PC releases like Spider-Man Remastered could convince them to make it a PlayStation 5.