He shoots, he scores? SpaceX recently successfully launched and landed their current Starship prototype, referred to as the SN10. Despite the successful flight and landing, SpaceX’s SN10 eventually exploded a few minutes later on its landing pad.

The SN10 was launched from a test site in Boca Chica, Texas yesterday afternoon. This was technically the second attempt at a launch, as the first launch had been aborted. SpaceX CEO Elon Musk tweeted, “Launch abort on slightly conservative high thrust limit. Increasing thrust limit & recycling propellant for another flight attempt today.” The fuel from the SN10 was recycled and the rocket was prepped for the next launch.

The second attempt was technically successful. The purpose of this particular test flight was to “gather the data on controlling the vehicle while re-entering.” The three engines of the SN10 shut down one by one once it reached around 32,800 feet (10 km) in altitude. The SN10 then flipped to orient itself for landing, re-fired the engines, and succeeded in landing on the landing pad. This was the first time a Starship prototype had been able to land after completing the “bellyflop” orientation maneuver.


The SN10 looked as if it was leaning a bit once to the side once it landed. Everything otherwise appeared normal until the SN10 exploded a few minutes shortly after landing. No one has yet to provide an official cause for the explosion, although some theorized that a methane leak is suspected. 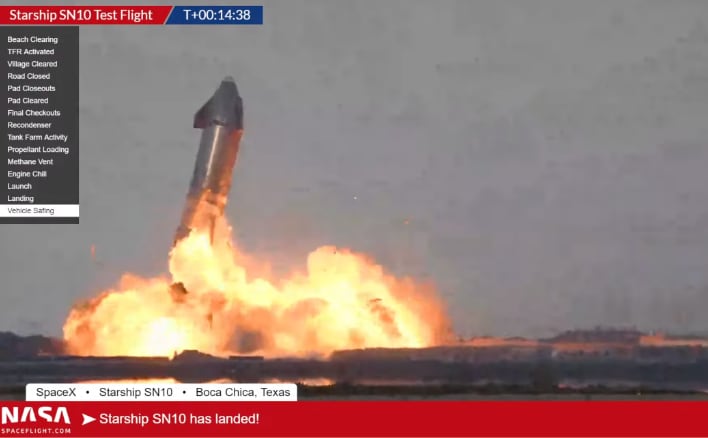 The SN10’s predecessors also did not survive their test flights. The SN9 was launched this past February and made it to roughly the same altitude as the SN10 before exploding. The SN8 met a similar fate in December. The rocket successfully performed most of the SpaceX team’s tests, but came in too fast and also exploded.

Musk has remarked that there are already several other prototypes in the works. The SN10’s successor, the SN11, should be ready for a test flight “in the near future." The SN11’s life will hopefully not end in a similar fiery explosion. Musk has stated previously that the Starship will be ready to launch human beings into orbit by 2023. Although the recent test was somewhat successful, it is unclear whether the work needed to prevent future explosions will cause any delays. Many have argued that the 2023 deadline is overly optimistic.