A SpaceX Falcon 9 rocket launched 52 more satellites into low-Earth orbit this past Saturday, marking the fourth launch and landing for this particular Falcon 9 first stage booster. The launch from Cape Canaveral Space Force Station in Florida provided a gorgeous image as it left a colorful path through clouds in the night sky.

SpaceX continues to launch more of its Starlink satellites into low-Earth orbit, in an attempt to give more satellite coverage for those using its internet service. A recent report from Ookla reported that the speed of the company's internet had slowed down during the last year, mainly due to adding more customers. Saturday's launch placed 52 more satellites into service. The company has said that it wants to put at least 12,000 Starlink satellites into orbit over the next few years, according to EarthSky. As the spacecraft moved through the night sky following launch, it left a spectacular path through the clouds. 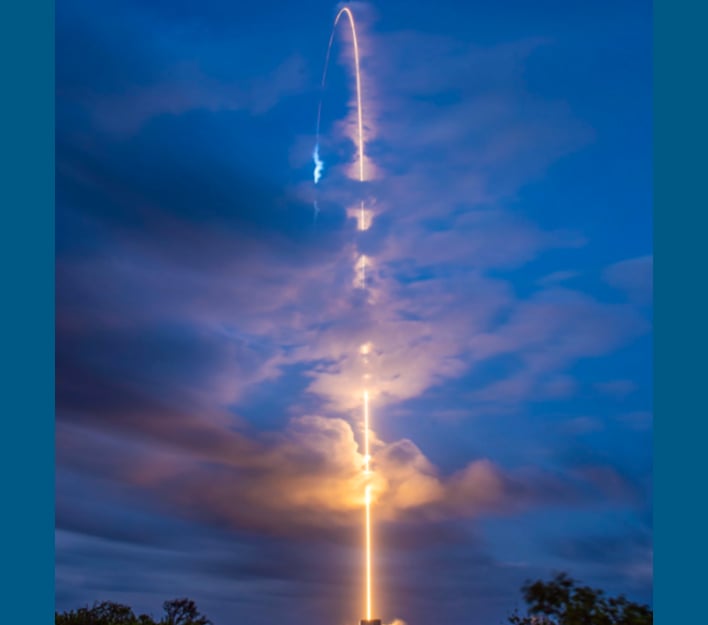 The Falcon 9 reusable first stage booster used this go round has also launched an SES-22 and two other Starlink missions. After the successful launch, the first stage landed safely on a droneship in the Atlantic Ocean. People along the East Coast reported being able to see the rocket following its launch around 7:30 p.m. on Saturday evening, thanks to clear skies.

Anyone that may be curious as to where Starlink satellites are at any given time, can utilize smartphone apps such as Satellite Tracker. The app is available on both Android and iOS and provides the location of satellites and other space objects such as the International Space Station. The built-in "Sky view" allows the user to point their device at the sky in order to see the satellite's movement and position in real-time. This can be useful if you are using a service such as Starlink internet and want to see which potential satellites are currently orbiting over your location.