Elon Musk made headlines earlier this year, when the billionaire sent Starlink satellite terminals to Ukraine in an effort to help the country against a Russian invasion. But those terminals are but a drop in the bucket compared to the more than 400,000 users worldwide. The service that utilizes satellites to deliver internet to people who would typically not be able to access affordable broadband, has seen more satellites going up on a regular basis. Starlink also began allowing people who were on its waitlist to start receiving service via its Starlink for RV as well. However, with more and more people being added, the speeds have slowed a bit over the last year, even with those additional satellites being sent up.

The report by Ookla surveyed satellite performance during Q2 2022 in Europe, Oceania, North America, and South America. It also incorporated results from eight additional countries, two new service providers, and expanded data for Starlink, HughesNet, and Viasat. What the survey ultimately found out was that median download speeds for Starlink had fallen between 9% to 54% from Q2 2021 to Q2 2022, mainly due to more users being added. It does point out, however, that the median speed in North America was still at least 60Mbps during Q2 2022. Even with the slower speeds, this makes the service a nice option for many who would not be able to reach that kind of download speed otherwise. 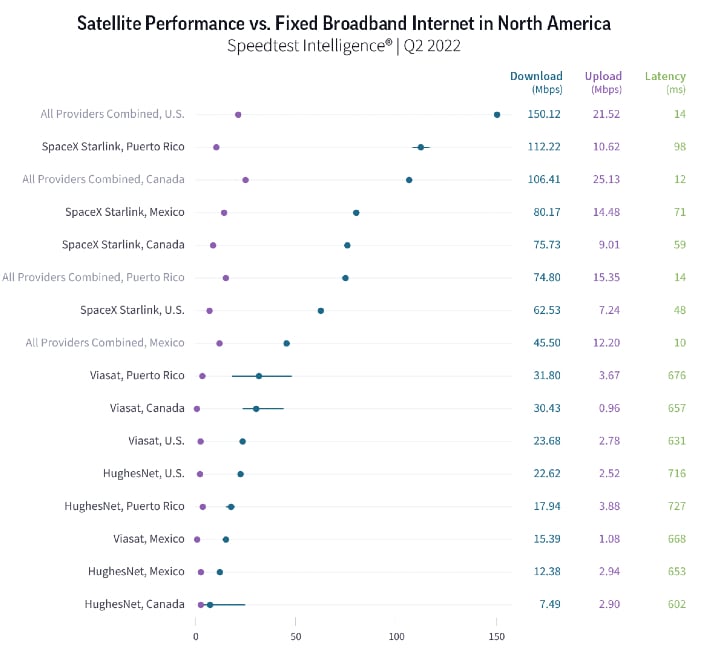 Puerto Rico had access to the fastest satellite speeds available in North America during the last quarter, with a median download speed of 112.22 Mbps. This was followed by Mexico (80.17 Mbps), Canada (75.73 Mbps), and the U.S. (62.53 Mbps). In Puerto Rico and Mexico, the Starlink speeds were actually faster than the fixed broadband providers combined.

It is important to note that not every Starlink customer will receive the speeds listed out in this survey. It all comes down to the user's location, and the location of Starlink satellites at any given time. But as SpaceX continues to send up more satellites, hopefully higher average speeds will be had for all.