SpaceX And NASA Dock With ISS, Now Try Your Own Hand Docking With This Online Simulator 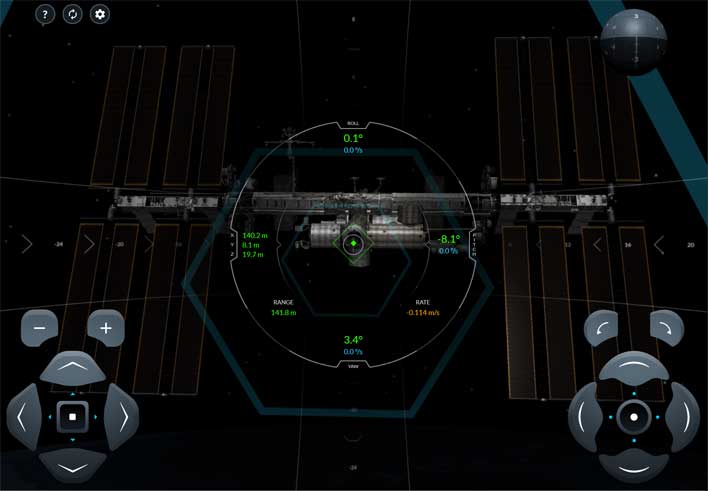 The United States rejoined the space race this week as SpaceX successfully launched its Crew Dragon spacecraft with a pair of NASA astronauts aboard heading to the International Space Station (ISS). The successful launch marked the first time since the space shuttle fleet was retired that the US hasn't had to hitch a ride with another country to get astronauts into orbit. The Crew Dragon capsule is highly automated compared to the space capsules used during the Apollo era. And fortunately, fans of SpaceX that wonder what the control systems inside the Crew Dragon spacecraft are like can try their hand at the helm using a very cool SpaceX ISS Docking Simulator.

The simulator requires no downloads and is played entirely in a web browser. The first time players launch the simulator, they are greeted with a warning message that movement in space is slow, and the game certainly bears that out taking a while to play in my testing. The main heads-up display in the center of the screen looks almost identical to the one seen on the screen in the Crew Dragon demo videos SpaceX has shown in the past.

There are hexagons on the screen that show the approximate path pilots need to follow to the ISS. In the bottom left and right corners of the browser screen are capsule controls. Controls on the left are for translate left, translate right, translate down, and translate up. In the center of those controls is a button that toggles between precision and large movement modes. Above those controls are plus and minus buttons that control the rate of speed the capsule closes with the ISS at in meters per second.

Docking confirmed – Crew Dragon has arrived at the @space_station! pic.twitter.com/KiKBpZ8R2H

On the right-hand side of the screen are controls for yaw right, yaw left, pitch down, and pitch up. A button in the center of those controls allows players to toggle between precision and large movement modes. Curved arrows above the pitch controls control how the capsule rolls left and right.

The simulator certainly doesn't move fast, particularly when the capsule is at a longer distance from the space station. Once you cross around 70 m distance from the ISS, significantly more controller inputs are required to keep the crosshairs in the center of the HUD trained on the green diamond that indicates the docking point the astronaut should be aiming for.

The simulator controls aren't complicated but are touchy. Every move made in one direction requires an opposite movement to prevent the capsule from overshooting your mark. If you click on the "?" In the top left corner of the screen, Docking Tips open up with the first noting that green numbers are required for successful docking, which is achieved when all numbers are below 0.2. In that area, the controls are also explained, noting that the capsule has to be properly oriented to dock.

There is no pause button for the game, kind of like the real deal. If you leave it open in your browser window, the capsule continues to converge on the ISS. SpaceX fans wanting to try their hand at docking the Crew Dragon can try the simulator themselves. And don't worry, if you mess up there is no fiery explosion, the game simply resets, and you try again. It's a great time for space fans with SpaceX giving America the ability to launch our own astronauts into the final frontier yet again.