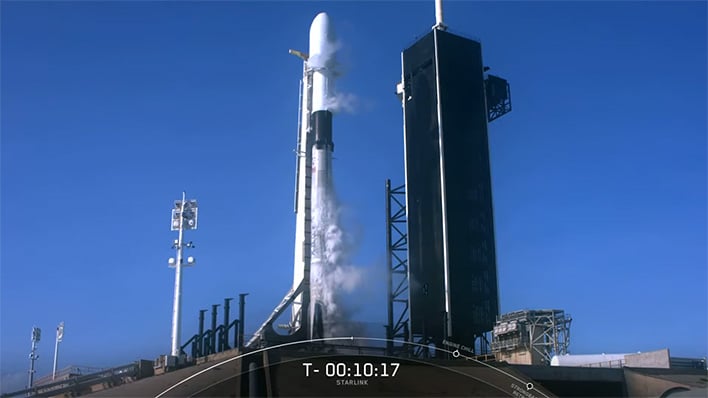 Elon Musk is making progress towards making high-speed Internet connectivity available to virtually all parts of the globe, through a network of thousands of satellites. SpaceX launched 60 more into space today, bringing the total to around 650 (towards the company's goal of around 12,000). During a webcast of the launch, SpaceX provided an update on the speeds its beta testers are seeing.
Before the launch, Kate Tice, senior program reliability engineer at SpaceX, offered up some interesting commentary. Tice noted that SpaceX is well into the first phase of testing of the private beta program for Starlink, and that a public beta will roll out sometime later this year (though she did not say precisely when).
Tice also said that Initial results "have been good" with fast speeds and low "super low latency."
"They show super low latency and download speeds greater than 100 megabytes [she meant to say megabits] per second. That means our latency is low enough to play the fastest online video games and our download speeds are fast enough to stream multiple HD movies at once and still have bandwidth to spare," Tice said.
You can check out the launch below...

Hitting download speeds in excess of 100Mbps is pretty impressive, and bodes for the service. Just a couple of weeks ago, it was reported that beta testers were hitting speeds of up to 60Mbps, based on Ookla's Speedtest benchmark. Likewise, the benchmark report pings ranging from 31ms to 94ms, out of a small sample (eight tests).
Tice did not provide specific metrics for the super low latency figures SpaceX is seeing, though it is definitely a point of interest, particularly with the company touting the ability to play games on Starlink. From previous reports, the finalized constellation of satellites is expected to deliver gigabit speeds, and low latency of around 25ms.
As for pricing, it was previously revealed that Starlink plans will go for around $80 per month. That is generally on par with gigabit service in some areas.