We now have some additional clarity on the cooling performance of the revised PlayStation 5 Digital Edition console that first debuted earlier this summer. The new PlayStation 5 carries the model number CFI-1100B01 and has some revised internals (namely a new, lighter heatsink) compared to the launch edition that has been available since November 2020.

Previous testing of the revised console revealed that the exhaust air was hotter than the launch systems. However, that observation doesn't provide enough information to indicate how the new, smaller heatsink affects cooling performance. Thankfully, the folks at HardwareBusters performed some extensive testing between the original PlayStation 5 Digital Edition and its new CFI-1100B01 counterpart. 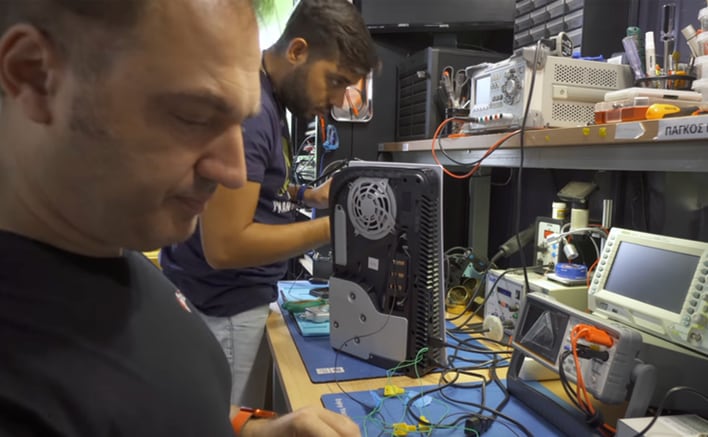 The team kicked things off by measuring power consumption, which didn't change much between the consoles. The newer device showed slightly higher numbers across the board, but it shouldn't be alarming to potential customers. The new console was also 1 dB louder for those that were wondering.

Next, temperature measurements were taken from three critical internal hardware components: the custom AMD Ryzen/RDNA 2 SoC, the VRAM, and the VRM. Despite its smaller, lighter heatsink, the new PlayStation 5 Digital Edition recorded a CPU temperature of 40.08 C while under load when gaming. For comparison, the original launch console was much warmer at 51.1 C. That is a dramatic difference in favor of the new model.

However, it wasn't all good news for the new PlayStation 5 revision. The VRAM temps ticked in higher compared to the older console at 48.20 C versus 40.88 C. In addition, the VRM was also slightly toastier, coming in at 46.32 C compared to 44.97 C.

Finally, HardwareBusters tested the temperature of the exhaust coming out of the machine, and their findings mirrored those from YouTuber Austin Evans. The new CFI-1100B01 model's exhaust air measured in at 42.11 C compared to 39.85 C. 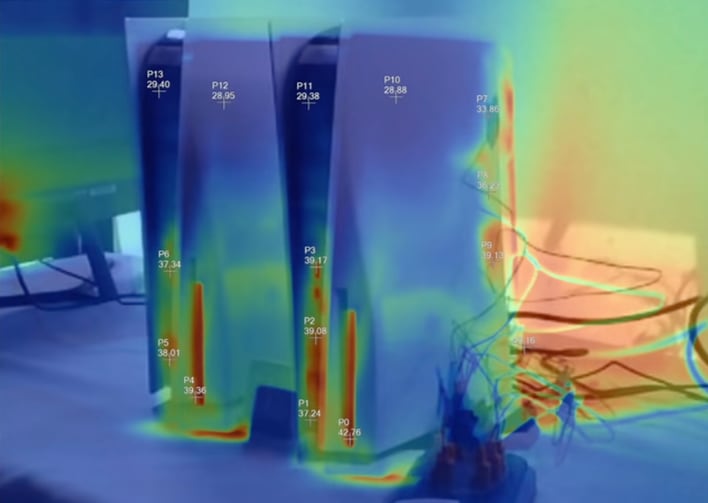 So while the massive drop in the SoC temperature at load is admirable, the increases from the VRAM and the VRM seemingly tip the balance back in the form of the higher recorded exhaust temperature. Still, an exhaust temperature difference of just over 2 degrees C is nothing to lose sleep over, in our opinion. It's not going to make a difference in how the console operates, and the minimal differences in the power consumption and noise output are expected. Sony didn't reinvent the wheel here; it's just performing a minor design change which will help it to trim costs here and there.

And as we've seen with the "standard" PlayStation 5 hardware already turning a profit for Sony less than a year after launch, the Japanese gaming giant knows what's it's doing.