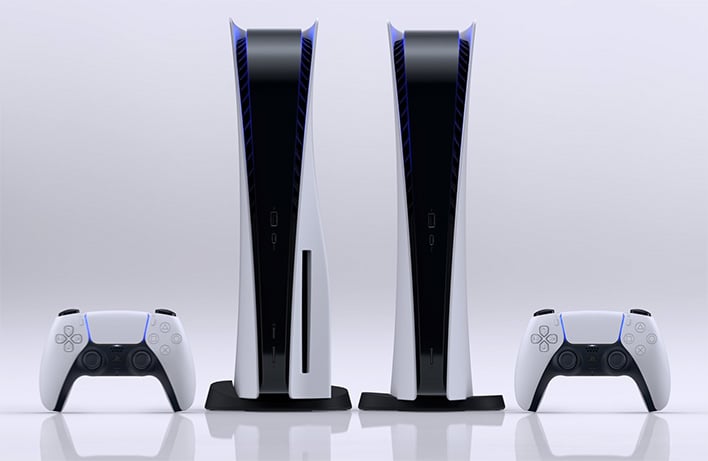 Is the upcoming PlayStation 5 already in trouble? That is probably an overreaction to think so, but challenges remain for Sony, such as competing with Microsoft and its Xbox Series X and Xbox Series S on price, and apparently supply as well. If the latest chatter is true, initial PS5 shipments will be millions of units less than originally planned.
The stakes are high, as true console refreshes only come around so often. Microsoft and Sony both have next-gen systems on the horizon, each powered by custom hardware built around AMD's Zen 2 CPU and RDNA 2 GPU architectures, along with fast NVMe SSD storage and hardware support for real-time ray tracing. Anticipation is off the charts.
According to Bloomberg, Sony initially planned to produce around 15 million PS5 consoles out of the gate, but has reduced that figure by 4 million units due to unspecified production issues with its custom system-on-chip (SoC).
It is a curious claim, considering the upcoming Xbox systems are built around the same hardware architectures. Be that as it may, they are different SoCs, so it is conceivable that one might run into some kind of production kink while it is smooth sailing for the other. And apparently that is the situation, if the report is accurate.
While the specific problem is not detailed, it is said that manufacturing issues have resulted in production yields being as low as 50 percent.. The report states the situation has been improving, but is not yet stable.
This is bad news for Sony, if true. Microsoft came out of the gate with aggressive pricing on its next-gen consoles, having announced that the Xbox Series X will sell for $499 and the disc-less Xbox Series S will go for $299. And on paper, the GPU hardware inside the Xbox Series X is more powerful than what is inside the PlayStation 5, though it remains to be seen how that might impact real-world gaming.
Sony has yet to announce pricing for its PS5 systems, and may have been caught off guard by Microsoft's announcement. Speculation is that the PS5 could debut at $449, and the all-digital version at $400.
On the positive side, Daniel Ahmad, senior analyst at Niko Partners, went on a mini tweet storm saying Sony has plenty of PS5 shipments in place for the US market. According to Ahmad, Sony has booked 60 flights (or maybe aircraft, he's not entirely sure) from October, all full with PS5 consoles, to meet demand for the quarter.
Are you planning to grab one of the new consoles when the come out? Let us know in the comments section!