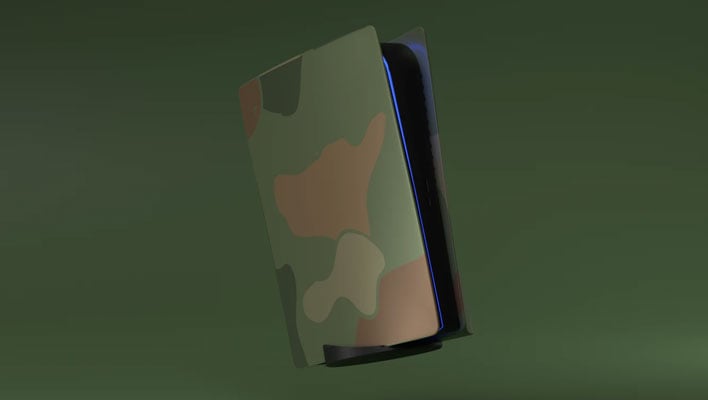 In about a week and a half, the PlayStation 5 will launch to retail, and it will not take long for the market to be flooded with third-party accessories, as is always the case. Ahead of the launch, however, Sony threatened legal action against a company that was selling custom PS5 faceplates, and it worked—refunds have been issued.
It is kind of a bummer that Sony would go this route, rather than let people have fun with modifying their console's shell in such a manner. I also understand where Sony is coming from, but I still think it is being a spoil sport (same as how I feel about Nintendo's very hard line stance against ROMs and emulators, but that is a story for another day).
The company in question kicked things off with a cleverly named site called PlateStation5. This quickly (and understandably) drew the attention of Sony and its legal team, which reached out the site owner and asked them to change the name. Which they did, to CustomizeMyPlates. Turns out that a simple name change was enough—Sony did not want them selling their $40 faceplates under any name.

In an email to VGC, the site said they did their due diligence before launching and, as they understood it, would be fine "because Sony only had pending patents on the faceplates." After just one day of the site being life, Sony compelled the site to change the name because of trademark infringement.
"We thought this switch would be enough to keep everyone happy, and honestly were hoping so since we were already underway with our product development. But then Sony’s lawyers told us it was their opinion, Sony’s intellectual property extended to the faceplates, and that if we continued to sell and distribute them in any country, we would end up in court," CustomizeMyPlates said.
Rather than go up against Sony's legal hounds, which I imagine could be expensive (especially if they lose), CustomizeMyPlates made the decision to cancel and refund orders that were already placed.
"We are extremely disappointed about this but we have no other option," they said.
Sony demonstrated in a teardown video that the plastic shell on the PS5 comes off rather easily. Technically, this would allow custom shells to be installed in their place. Sony may have aspirations of offering its own custom shells, or more likely license it out to third-party manufacturers. Hopefully that is the case, anyway, as opposed to not letting anyone make custom designs.
In lieu of custom faceplates for the PS5, CustomizeMyPlates continues to sell various skins, both for the console itself and various accessories.