When you buy a new game console, you expect improved graphics and performance over the last generation, right? You don't want your current-generation game console to have performance problems. The Xbox Series S may be a step down from its Series X sibling, but it's still a potent current-generation game console, and it shouldn't be struggling with games. Unfortunately, that's the case with the brand-new Sonic Frontiers, which runs at 30 FPS on Xbox Series S.


If you consult the Reddit thread where folks were discussing this issue, you'll find some users saying they aren't affected. Still others say that the game runs unacceptably poorly, by which they mean "at 30 FPS." 30 FPS might be "cinematic," but the 33-millisecond screen refresh is a real damper on a fast-paced game experience, and there's nobody more fast-paced than Sonic the Hedgehog.
It turns out that the reason some people aren't affected while others are struggling is likely down to their TV, as well as a poor default setting in the game itself. As it happens, Xbox Series S supports 4K output, but most games will reduce their render resolution, because even though it uses the same eight Zen 2 CPUs as the Xbox Series X, the baby brother's GPU is relatively puny in comparison.


Apparently, Sonic Frontiers doesn't do this. Instead it runs at an upscaled WQHD resolution on 4K displays, and this is what's causing the low frame rate. It's not an FPS cap, it's just bad performance, and if you're a PC gamer, you'll know that a game running at 30 FPS due to hardware limits feels a whole lot worse than a game capped at 30 FPS. 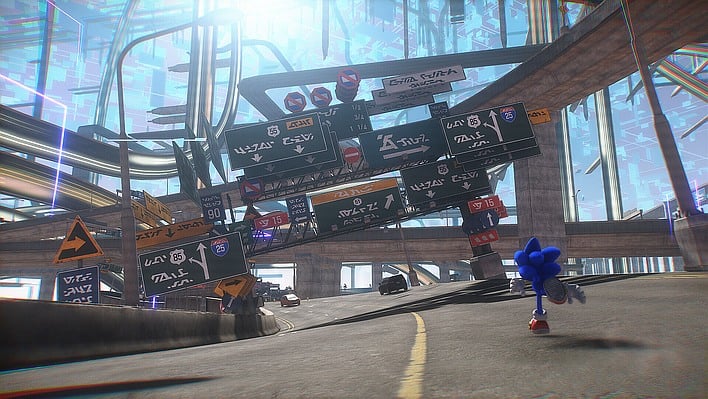 There is a workaround, though, thanks to TheGamer, who reached out to Sega for comment. If you're suffering this issue, all you need to do is go into your Xbox's system settings and limit its output resolution to 1080p. That'll force the game to run at 1080p instead of WQHD, and that'll let you stay at the 60 FPS cap most of the time. Of course, you'll suffer a small drop in visual quality, but that's the way the chili dog crumbles.


It's not all doom and gloom for a sharp Sonic on Series S, though—Sega says it's looking into the issue, and will provide a fix in a future update. That could simply mean limiting the resolution to 1080p altogether, which would be a bummer for folks who want to enjoy the game in a higher resolution. Instead, hopefully, the company will provide a performance-or-fidelity toggle like it has on the Xbox Series X. Of course, even better would be if the company let users play around with the graphics settings, but that might be too much to ask for console gamers.
If you haven't heard about Sonic Frontiers, it's the latest Sonic the Hedgehog game from SEGA. It features an updated Hedgehog 2 graphics engine with lush visuals and, normally, plenty of fast-paced action. There's an open-world element to the game, and it features a slightly greater emphasis on combat than previous Sonic games—well, aside from Sonic Unleashed. And Sonic the Fighters. Anyway, the game is getting fairly positive reviews, although the PC version does still have some kinks that need to be worked out, as usual. You can pick it up on Steam.