John McAfee, the man behind McAfee Antivirus, has quite a long and storied history, from running for president to running from authorities. Now, McAfee is getting a few more items tacked on to his absurd life story: cryptocurrency fraud and money laundering.


The Securities and Exchange Commission (SEC) charged John McAfee for “promoting investments in initial coin offerings (ICOs) to his Twitter followers without disclosing that he was paid to do so.” The allegations stem from McAfee, who seemingly “promoted multiple ICOs on Twitter, allegedly pretending to be impartial and independent even though he was paid more than $23 million in digital assets for the promotions.” The fraudulent activities reportedly took place between December 2017 and October 2018, but the documents surrounding the case were just unsealed today.
When asked whether he was impartial or paid to promote the ICOs, McAfee denied receiving any payment or compensation. Similarly, the “complaint alleges that McAfee made other false and misleading statements, such as claiming that he had personally invested in some of the ICOs and that he was advising certain issuers.”

McAfee’s bodyguard, Jimmy Watson, Jr. was also involved in the scheme, as he helped “McAfee cash out the digital asset payments for the promotions, and, for one of the ICOs McAfee was promoting, having his then-spouse tweet interest in the ICO.” Watson was arrested in Texas for his part in the scheme, while McAfee was arrested last year in Spain for separate tax evasion charges and is currently awaiting extradition to the United States. The pair faces 7 charges, with some carrying up to a 20-year prison sentence: 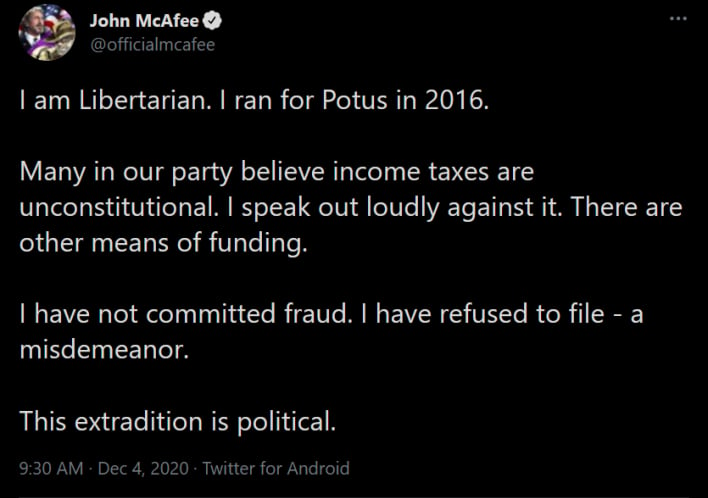 McAfee has been tweeting about his innocence throughout the jail stay as well as his recurring disdain for taxation, calling it extortion. Now that formal charges have been levied against him, we will likely see a rather interesting fight begin. Whatever ends up happening, keep an eye on HotHardware for updates on this bizarre, developing story.