When the limits of the PCIe 3.0 interface started holding back high-performance SSDs, the industry made the logical leap to PCIe 4.0. With that change came the arrival of the first SSDs with 5,000MB/sec sequential reads and similar writes. As SSD controller technology has matured and faster NAND has been introduced over the past two years, we’re now surpassing 7,000MB/sec reads, as witnessed by the new FireCuda 530 launched this week by Seagate.

When it comes to random reads and writes, the two highest capacity drives are rated for 1,000,000 IOPS. That extreme performance comes with some relatively high average [active] power consumption ratings as well, with the 500GB SKU consuming 5.8 watts compared to 8.4 watts for the 4TB SKU. To keep temperatures in check to minimize the effects of performance throttling, Seagate [optionally] offers a relatively low-profile EKWB aluminum heatsink.

Concerning endurance, the 500GB SKU is rated for 640 terabytes written (TBW), while the 4TB SKUs tops the charts at 5,100 TBW. In addition, the SSDs come backed by a 5-year limited warranty and three years of Rescue Data Recovery Services. 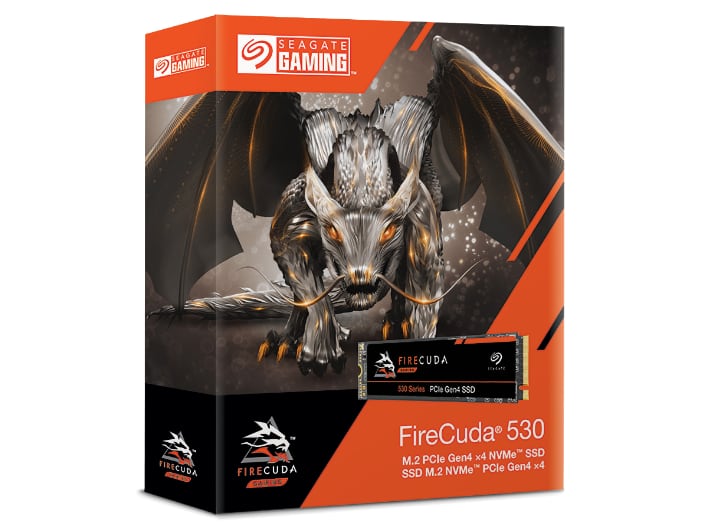 “This is Seagate’s fastest and most powerful gaming SSD, and we’re showcasing it at our first-ever virtual gaming event to put a stake in the ground,” said Jeff Fochtman, SVP of Marketing for Seagate Technology. “From the FireCuda 530, to our lineup of partners and guests at SG21, we’re here to take it all to the next level.”

The SSDs will be available from Seagate’s vast portfolio of retail partners in the coming weeks.