Finding a current-generation game console in stock from a first-party retailer continues to be a difficult task. Even harder is nailing down a limited edition variant. Namely, the 'Xbox Series X Halo Infinite Limited Edition Bundle' that consists of a themed design in celebration of 20 years of Halo. However, you might already be on the short list to buy one—check your inbox.
Microsoft is apparently sending out email invites to select users, according to @LordOfRestocks. Those invites contain a special link to the Microsoft Store, where buyers can piece together a bundle around the limited edition console. The catch is that you have to tack on an extra controller and also choose from a list of games, so the out-the-door price is a little higher than if you were able to find just the console in stock somewhere. 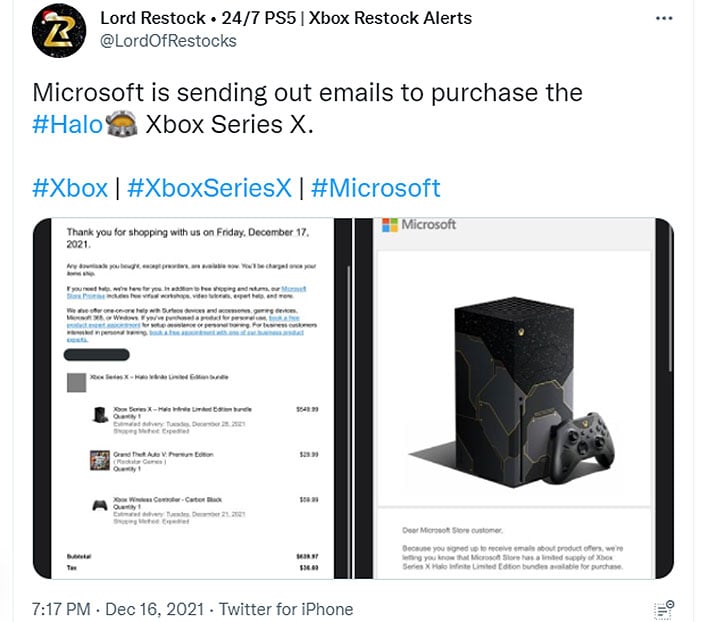 These are not junk add-ons, though. You might have already intended to buy a second controller for in-person multiplayer action, and starting off with an extra game isn't a bad proposition. That's what these systems are primarily intended for, after all.

Microsoft had previously sent out invites for the regular Xbox Series X, and I can confirm those were legitimate offers—I received one last month and purchased a console, which arrived as advertised. At the time, the list of games required to choose from included the following titles...
Looking at the tweet above, it appears that GTA V is still one of the options, albeit no longer on sale. Controller pricing at the time ranged from $49.99 to $139.99.
The emails come from microsoftstore at microsoftstore dot com, and are being sent out to Microsoft account holders who "signed up to receive emails about product offers." Check your inbox, as well as your deleted emails in case you mistakenly assumed there was nothing interesting in the email, and your spam folder too.
Also be sure to check the email header to make sure you're not falling for a phishing scam. I'm not aware of any going around that are spoofing these offers, but it's probably only a matter of time.
Finally, if you're not a lucky recipient of an invite, your next best bet is to follow Twitter accounts that keep a pulse on restocks, including @LordOfRestocks, @mattswider, and @Wario64.