We've seen some rather outlandish Radeon RX 6900 XT cards over the past few weeks, including the OC Formula from ASRock and the Liquid Devil Ultimate from PowerColor. Now it's Sapphire's time to shine in the limelight with the Toxic Radeon RX 6900 XT Extreme Edition (try saying that three times fast).

As its name implies, the graphics card uses a Toxic AIO cooling solution that wicks heat away from the GPU to a 360mm radiator. That radiator includes 120mm fans that help keep the GPU temperature at around 85 degrees Celsius while noise levels never top 36 decibels. Contributing to the low noise output are dual ball bearing fans and a hybrid fan blade.

As you might expect from a high-end graphics solution, the Toxic Radeon RX 6900 XT Extreme Edition has a rather aggressive design outfitted with RGB lighting elements on the graphics card, radiator, and fans. Color effects can be adjusted using the Sapphire TriXX software, which will allow you to even sync colors with your graphics card and motherboard. 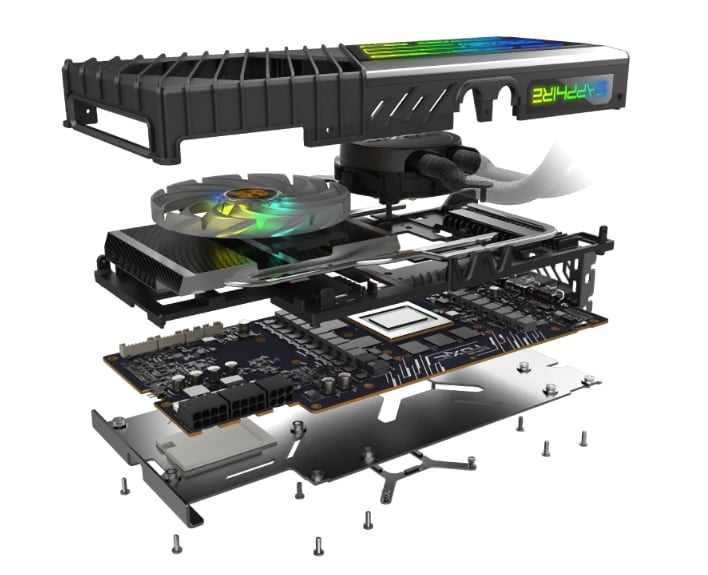 When you put it all together, the Radeon RX 6900 XT basics are here, including the 5120 stream processors, 16GB of 16Gbps GDDR6 memory using a 256-bit bus, and 128GB of Infinity Cache. We must keep in mind that the reference AMD Radeon RX 6900 XT has a game frequency of 2015MHz and a boost frequency of 2250MHz. The Toxic Radeon RX 6900 XT Extreme Edition, by default, boosts those clock speeds to 2375MHz and 2525MHz, respectively. However, there's also a Toxic Boost mode that pushes those clocks even further to 2500MHz (Game) and 2730MHz (Turbo).

Unfortunately, Sapphire isn't providing us with information on pricing and availability at this time. However, rest assured that the card won't be priced anywhere near the $999 mark of reference cards, and street pricing will be well over whatever MSRP that Sapphire sets at launch due to immense demand.