As we saw in our Radeon RX 6900 XT review, AMD's flagship consumer graphics card based on its second generation Radeon DNA (RDNA 2) graphics architecture is an immensely powerful and capable GPU, with a beefy 16GB of GDDR6 memory to boot. Not content to stick with stock performance, however, AMD's hardware partners have released some overclocked models. The latest is ASRock's newly minted Radeon RX 6900 XT OC Formula Edition card.
This is the fastest showing of Big Navi to date. Like all Radeon RX 6900 XT cards, it's built around a Navi 21 XTX GPU based on a 7-nanometer manufacturing process, with 26.8 billion transistors, 80 compute units, 5,120 stream processors, and 80 ray accelerators, crammed onto a die that measures 519mm2. At stock settings, the GPU features a 1,825MHz base clock, 2,015MHz game clock, and 2,250MHz boost clock. 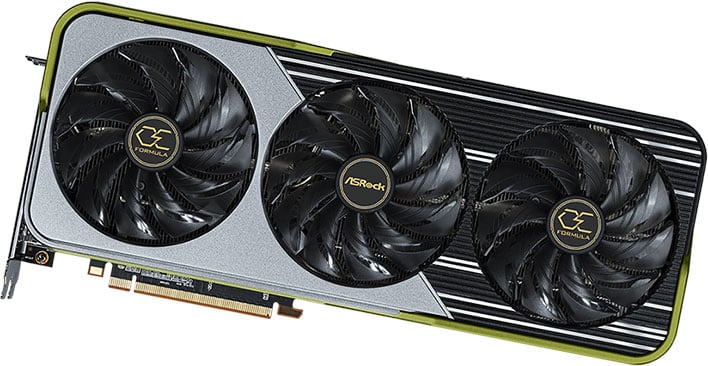 ASRock's new Radeon RX 6900 XT OC Formula card goes the extra mile, however, by cranking the base clock to 2,125MHz. The game and boost clocks depends on which BIOS mode you select...
There's a little toggle switch on the card to select between the two BIOS versions, as well as another switch to turn the built-in RGB lighting on or off, depending on your preference.
Looking at the clock options, ASRock is offering up to a 225MHz overclock to the boost clock, which is pretty impressive for a flagship GPU. That also represents a 50MHz gain over PowerColor's Red Devil Ultimate Radeon RX 6900 XT, which is a specially binned card to ensure stability at even higher clocks than standard cards, with an increased power limit.
In addition to a dual BIOS setup, ASRock's OC Formula card sports a 21-phase power design and "high quality components," for stable power delivery to the GPU. It draws power from three 8-pin PCIe connectors, and keeps things cool with a triple-fan cooler that utilizes striped axial fans. The fans only spin at a certain temperature threshold, to keep things silent at idle. 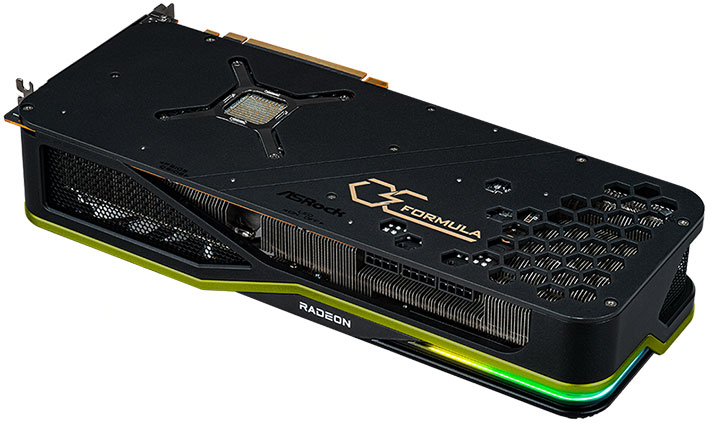 ASRock's card also features a metal backplate, as shown above, which offers up some rigidity to prevent bowing, and style points too. The cover on the front is metal as well.
Underneath it all is a pair of finned aluminum heatsinks with heatpipes snaking through. ASRock touts things like high-density metal welding to isolate coverage of the gap between the pipes and stacked fins, air-deflecting fins in a V-shape to guide the airflow, a nickel-plated copper base, and high quality thermal paste to keep temps in check.
How it all works remains to be seen, as we have not tested this card ourselves. On paper, however, this is currently the fastest Big Navi card out there, having usurped PowerColor's Red Devil Ultimate for the bragging right.
Pricing and availability have not been announced, but we'd venture a guess those to be 'very expensive' and 'good luck finding one in stock'.