When it comes to smartphones, the system-on-chip (SoC) and camera arrangement usually steal the limelight, but don't overlook the memory. Not just the capacity, but the type and speed as well. Samsung isn't overlooking this crucial component, and as such is touting the validation of its 8.5Gbps LPDDR5X DRAM for use on Snapdragon mobile platforms.
To be clear, the memory itself is not new. Samsung announced the development of the industry's first-ever 14-nanometer based 16-gigabit (Gb) low power data rate 5X (LPDDR5X) DRAM last November, with data speeds of up to 8.5Gbps. That represents a 1.3X uptick over LPDDR5 and its 6.4Gbps data rate, with the added bonus of a 20 percent lower power consumption. 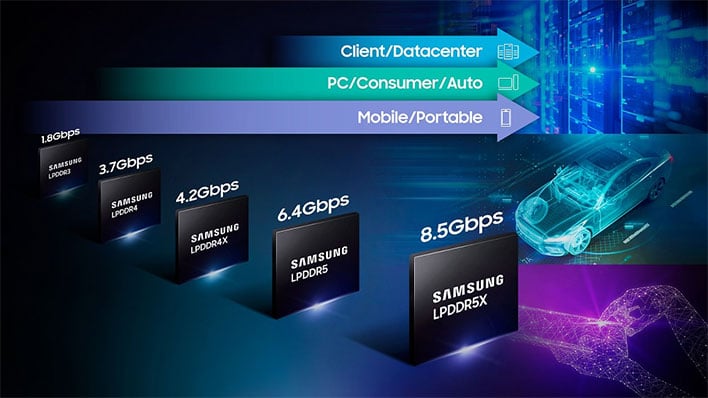 What's new is the validation for Snapdragon devices. For consumers, this means it won't be long before we see Samsung's cutting-edge DRAM in flagship smartphones.
"At Qualcomm Technologies, we strive to be at the forefront of enabling and adopting the latest memory specifications on our Snapdragon mobile platforms. We’re the first in the mobile industry to enable the latest LPDDR5X at 8.5Gbps on Snapdragon mobile platforms, which will enhance user experiences with new features and improved performance for mobile, gaming, camera and AI applications," said Ziad Asghar, Vice President of Product Management, Qualcomm Technologies, Inc.
While not outright specified, this announcement means we'll likely find Samsung's speedy LPDDR5X in phones powered by Qualcomm's Snapdragon 8 Gen 2 chip, which hasn't been launched or announced yet. We could also see this in notebook applications, given that Samsung previously said its 16Gb LPDDR5X chips enable total memory packages of up to 64GB.
Generally speaking, Samsung says the market for faster, smaller, and more power efficient DRAM like its 8.5Gbps LPDDR5X will extend its reach in emerging markets driving by artificial intelligence applications and the metaverse, along with modern vehicles, the data center, and various other sectors.