Samsung Unpacked 2022 Date Confirmed: When And What To Expect

Samsung is getting ready to host this year's Unpacked event, which the company has now confirmed will take place on February 9, 2022. The date is pretty much in line with previous rumors and speculation, though we know for sure. During the event, Samsung will undoubtedly unveil some new products, including a new flagship smartphone.
The event will commence at 10:00 am ET (7:00 am PT), so if you're on the West Coach and want to catch it live, you'll need to get up a bit early. February 9 falls on a Wednesday, by the way. Of course, Samsung hasn't outright told us what to expect, but we have some guesses, starting with the Galaxy S22 series.

Ahead of the Unpacked event, Samsung appears to have tipped its hand by accepting preorders for the Galaxy S22 series. Even more than that, Samsung President Dr. TM Roh said, "At Unpacked in February 2022, we'll introduce you to the most noteworthy S series device we've ever created." So make no mistake, a new flagship is afoot.
While details about the Galaxy S22 are under lock and key for the moment, it's worth noting that Samsung recently unveiled its Exynos 2200 hardware with an Xclipse 920 GPU based on AMD's RDNA 2 graphics. That's certainly a candidate for the Galaxy S22. That said, there have been rumors that the GPU's frequency is not where Samsung would like it to be, so it's also possible that we could see a Snapdragon 8 Gen 1 SoC. We'll have to wait and see. 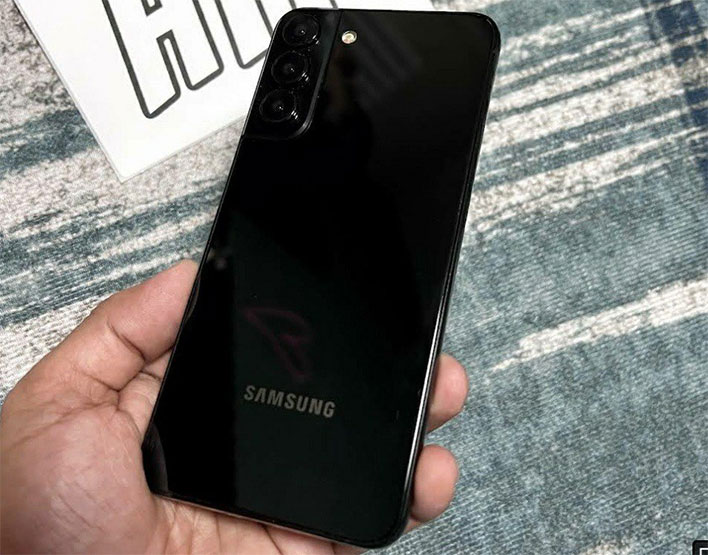 Bear in mind that Samsung has left behind its Galaxy Note line. As such, there is chatter than the Galaxy S22 Ultra SKU will feature an onboard S-Pen. It could also debut with a glossy design, as indicated by a purported photo of the handset that leaked to Weibo a few weeks ago (shown above). If that photo is accurate, the Galaxy S22 will retain a vertical triple camera arrangement on the back, alongside an LED flash on the side.
Otherwise, we can expect the usual camera performance upgrades that come with each new flagship, along with oodles of RAM and built in storage. As for any tricks Samsung might have up its sleeve, we'll have to wait and see.
We could also see the launch of a Galaxy Tab S8 Ultra tablet, as has been rumored. It's expected to debut with a 14.6-inch Super AMOLED display sporting a 2960x1848 resolution, and possibly a 120Hz refresh rate to boot. It's also been suggested in prior leaks that it could wield a pair of selfie cameras and a capacious 11,500 mAh battery.
Finally, it's reasonable to expect a new set of Galaxy Buds. It's worth noting that Samsung launched its Galaxy Buds Pro at the same time as the Galaxy S21 Ultra last year, so it makes sense that it could take the same approach with the Galaxy S22 Ultra.
In any event, we'll be covering the announcements, so stay tuned!