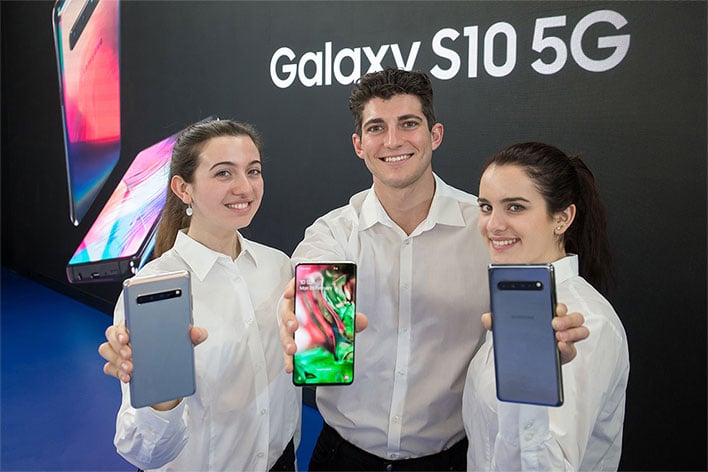 The 5G revolution has begun, though not necessarily in earnest—5G connectivity is still the exception to the norm, for the most part. Samsung is doing its part, though. The company has revealed it sold a staggering 6.7 million 5G-enabled Galaxy smartphones in 2019, which gives it the lead on the hardware side.
According to Samsung, it rose to a 53.9 percent share of the global 5G smartphone market in November 2019. It's not clear which company is the next closest, but the fact that Samsung's hardware accounts for half of the market is an achievement worth bragging about. Whether Samsung can hold onto its lead throughout 2020 is something that will be interesting to watch.

"Consumers can’t wait to experience 5G and we are proud to offer a diverse portfolio of devices that deliver the best 5G experience possible," said TM Roh, President and Head of Research and Development at IT & Mobile Communications Division, Samsung Electronics. "For Samsung, 2020 will be the year of Galaxy 5G and we are excited to bring 5G to even more device categories and introduce people to mobile experiences they never thought possible."
Samsung managed to snag over half of the 5G smartphone market by offering several 5G-enabled models, including the Galaxy S10 5G, Galaxy Note 10 5G, Galaxy Note 10+ 5G, Galaxy A90 5G, and Galaxy Fold 5G.
There is still plenty of room for growth as well. Neil Shah, VP of research at Counterpoint Research, says 5G smartphones only accounted for 1 percent of global smartphone sales in 2019. Shah says 2020 will be a "breakout year" for 5G smartphones, a category that is "poised to grow 1,687 percent."

"With tremendous 5G growth opportunities on the horizon, Samsung, over the next decade, is in a great position to capitalize by further investing and building on the early lead and momentum," Shah added.
At some point, and perhaps even later this year, Apple will jump on board the 5G bandwagon as well. I suspect the split between Apple and Samsung will be pretty close after a generation or two of 5G-enabled iPhone models finding their way to the market, but in the here and now, Samsung is leading the charge.
Outside of smartphones, Samsung says it plans on launching a 5G tablet, the Galaxy Tab S6 5G, in the first quarter of this year. It will debut in Korea, and presumably find its way to other territories.
For any of this to really matter, wireless carries have to keep expanding their 5G networks. At present, 5G connectivity is mostly found in big cities. All four major wireless carries in the US, however, have plans to flesh out their respective 5G networks, and hopefully by this time next year availability will far more widespread than it is now.