Smartphones are inherently personal devices. We use them to help with and document so much of our lives. While data security is always a concern, the physical act of handing our phones over to be serviced can be particularly nerve-wracking. Sometimes the technician can perform the service in front of your watchful eye, but often smartphones need to be left with a repair shop or mailed out to facilitate a warranty repair. There is now a new way to help secure your data. Samsung is introducing a new Repair Mode setting which allows users to protect their personal data before handing their phone off to get fixed.

The best way historically to protect your data before sending a device off for service has been to perform a factory reset. This approach is effective but has obvious drawbacks. Not only is it a hassle to back up and later restore data, but it also requires a certain level of technical acumen to ensure nothing gets lost in the process. Alternatively, some photo gallery apps will allow users to lock away certain sensitive images behind a passcode. However, this still leaves text messages, emails, and other data vulnerable to snooping by an unscrupulous technician. Some phones graciously include MicroSD card support where data can be squirreled away to while the repair takes place, but such luxuries are becoming scarcer by the year.

More users can easily protect their data when the phone leaves their hands without having to resort to the “nuke and repave” approach with Samsung's new Repair Mode. On supported devices, users will be able to go under Settings to the Battery and Device Care menu where they will find the new Repair Mode option. Once activated, Repair Mode will lock out access to personal data and only allow the use of default installed applications. The user can then unlock Repair Mode and regain access to their personal data after a reboot and reauthentication upon receiving the phone back. 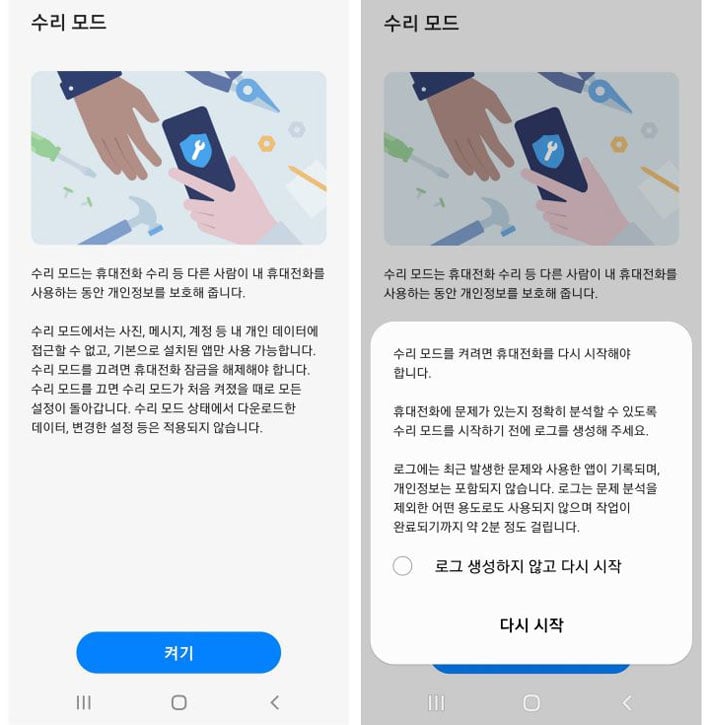 As with anything, there are limitations. Users with non-functioning displays, broken touch controls, or phones that simply will not power on likely will not be able to get in to enable Repair Mode. Nevertheless, many of these same issues would also prevent a factory reset or other privacy measures. It is still a fantastic option to have when it can be leveraged.

We are also awaiting more specific details about how the protection is being implemented. For instance, is the data undergoing an extra layer of encryption or is it simply being removed from view? We would expect Samsung is leveraging Knox Vault to manage this function, though such a connection has yet to be spelled out.

Curiously, Samsung indicates the feature is first going to be pushed out to the Galaxy S21 Series of devices via an update, but the announcement has no mention of the Galaxy S22 Series. The company has not provided a roadmap to support other phones in their line-up beyond indicating it will come to “some other models in the future.” We hope that list will be as exhaustive as possible to also protect owners of older devices.