Samsung is rolling out a new version of its Pro Endurance microSDHC and microSDXC memory cards that are rated to deliver more than triple the amount of continuous recording time as the previous version—up to 140,160 hours, which works out to 16 years. Slap one of these cards in your dash cam and might very well outlast your car!
Part of the not-so-secret sauce in Samsung's recipe for such longevity is the use of "high reliable enterprise-grade NAND flash memory." A single Pro Endurance card could, in theory, last as long as up to 33 typical speed-focused cards, Samsung says. The upshot there is saving on replacement costs, and greater peace of mind that your memory card won't give up the ghost when you need it the most.
These microSD cards are apparently designed to withstand the elements, too.
"Since outdoor surveillance and body cameras can be subject to harsh environments, the Pro Endurance has been engineered to offer trusted performance in everyday use with Samsung’s reinforced six-proof durability. In addition to protection against water, magnets, X-rays and extreme temperatures, the card is now wearout-proof and drop-proof," Samsung says.
Samsung's offering four capacities, including 32GB, 64GB, 128GB, and 256GB. These are Class 10 cards with video speed ratings of up to U3 (UHS Speed Class 3) and V30 (Video Speed Class 30). They are rated to deliver read speeds of up to 100MB/s. For writes, the 32GB and 64GB are rated at up to 30MB/s, while the 128GB and 256GB are a little faster at up to 40MB/s. 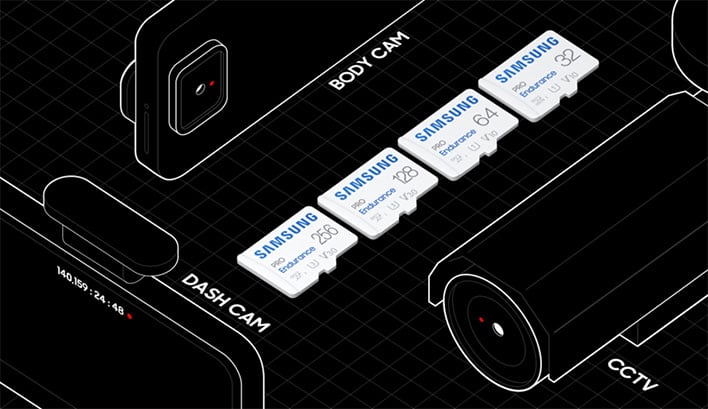 That max endurance rating of 16 years, by the way, is exclusive to the 256GB capacity card. Here's how it breaks down...
You'll have to trust that Samsung's endurance ratings are accurate, as the warranty period falls short of the max rating in most cases. Specifically, the 256GB and 128GB are backed by five year warranties, the 64GB is guaranteed for three years, and the 32GB model carries a two-year warranty.
In addition to dashcams, these cards are suitable for things like surveillance cameras, doorbell cameras, body cameras, and so forth.
These cards are available now at the following price points...