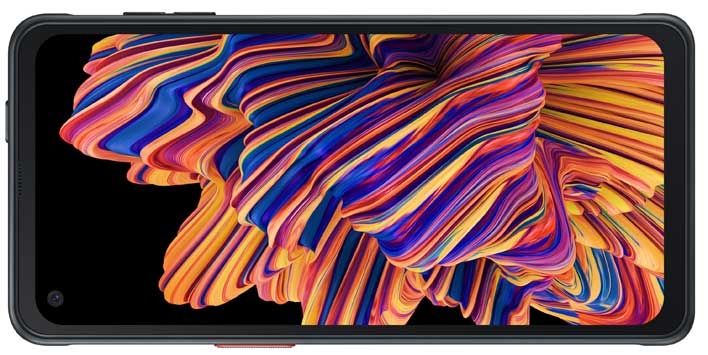 Samsung has confirmed a new ruggedized smartphone called the Galaxy XCover Pro that is enterprise-ready and aimed directly at business users. Rather than being a smartphone made out of metal and glass, it's covered in a ruggedized case that some may find more attractive than a regular smartphone stuffed inside a protective case. Along with being rugged enough to survive in the field with workers, the device also has enterprise-ready features like support for the new walkie talkie capability in Microsoft Teams.

Samsung says that it has optimized the smartphone for retail, manufacturing, healthcare, and logistics environments. The Samsung Galaxy XCover Pro is IP68 water and dust resistant and can survive drops of up to 1.5m without a case. The smartphone is also MIL-STD 810G certified to survive in extreme altitude, humidity, and other severe conditions. Samsung built-in pogo pin charging support and compatibility with third-party charging docks. One very nice touch for those using the devices constantly for business is a user swappable 4,050 mAh battery.

Spare batteries can be carried and swapped on the go as needed. Samsung also fits the XCover Pro with two programmable keys to create custom actions with one click. The functionality also allows users to have one-button access to things like scanners, flashlight, or launch an app with a single click. The device also gives up the physical home button.

The screen is an edge-to-edge 6.3-inch FHD+ Infinity Display with an enhanced touchscreen that works in rain or snow. A glove mode supports use with gloves on the hands, and the device has a voice to text feature that supports real-time dictation. The smartphone is ready for mobile point of sale operations with payment modules based on SDK for mPOS solution vendors.

It has integrated Samsung POS, a mobile-based point of sale terminal that is part of the Visa Tap to Phone pilot program that accepts payments by tapping credit cards on the device. The SoC is the Exynos 9611 paired with 4GB of RAM and 64GB of storage. We first heard about the XCover Pro a few days ago when it was confirmed for Europe at €499 with a February launch. A launch date for the U.S. is a mystery, but it will be priced at $499.