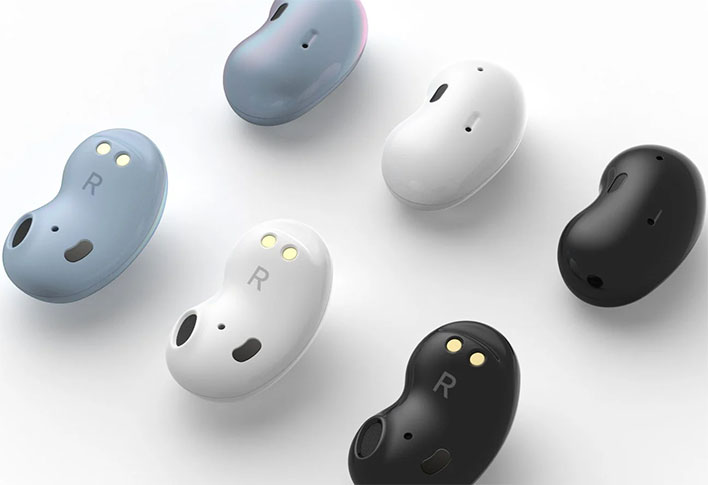 The next round of Galaxy Buds look like something Jack would trade the family cow for, in hopes that they contain magic abilities. They look like beans, is what we are saying. Bean-shaped earbuds were rumored to be the design Samsung would roll with, and it seems that will indeed be the case, according to an image asset lurking in the latest Galaxy Wearable application.

Wireless earbuds have become hot ticket items by phone makers, particularly Apple and Samsung. Each one has their own unique design. As for what the next round will bring, the folks at XDA Developers dug through the latest version of the Galaxy Wearables app and found a black and white image asset for a bean-shaped design.
This is in line with previous rumors, which resulted in the folks at WinFuture.de making some nifty looking renders. According to leaker Roland Quandt, the renders (as shown in the image up top) are based on actual 3D design data, and represent a "full redesign with massive changes." Even the codename is said to be "Bean."
The more recent (and official) image asset had a string attached that read, "buds_live" at the end of the file name. There are no other references to the same thing, but it is possible Samsung will call its next-gen wireless earbuds Galaxy Live. Incidentally, Samsung also filed for a trademark for Galaxy BudsX, so that is a possibility as well. Either way, it's rumored the earbuds will feature active noise cancellation.
A search of the Galaxy Wearables app also revealed a black and white image asset that simply reads, "Galaxy Watch 3." This seemingly confirms that Samsung's next Galaxy Watch will be called Galaxy Watch 3, rather than Galaxy Watch 2 as previously rumored. This make sense, because there does exist a Galaxy Watch Active 2, which could make things confusing.

The Galaxy Watch 3 could come in four flavors, according to related FCC certifications. Two of the certifications indicate a 41mm size, one with Wi-Fi and Bluetooth connectivity, and the other with a cellular radio. The other two point to a 45mm size, also with Wi-Fi and Bluetooth or cellular.
Past leaks have suggested the Galaxy Watch 3 will also sport a bezel that rotates, GPS support, and various durability ratings.