Samsung Galaxy Unpacked 2022 Is Headed To The Metaverse, When And How To Watch

There will be plenty of places to watch Samsung's next big Galaxy Unpacked event live as it unfolds, including several streaming locations across places like Facebook, TikTok, and YouTube (to name just a few of many). In addition, you can watch Samsung its next-generation flagship smartphone (presumably the Galaxy S22) in the metaverse.
Yes, Samsung is embracing the metaverse buzz and is leveraging its Unpacked 2022 event this week to promote 837X, a virtual recreation of its flagship New York City store location. In resides in what Samsung calls Decentraland, a 3D virtual world inside your desktop browser that feels a lot like Second Life (or what I remember Second Life to be when I played it ages ago).

"Samsung 837X is a fully immersive experience, featuring quests, NFT prizes, product reveal events, and live performances. To see it for yourself, enter Decentraland using your desktop browser. It’s a blockchain-powered virtual space, where you can buy and sell exclusive digital assets, like land and wearables," Samsung explains.
Once inside, your avatar is plopped in front of the virtual 837X building and you can move around using your keyboard's WASD keys, just like playing a typical video game. Samsung says the interior space is ever-evolving and is designed to deliver metaverse interactions that fuse together pop culture and innovations.

When, How And Where To Watch Samsung's Galaxy Unpacked 2022 Event 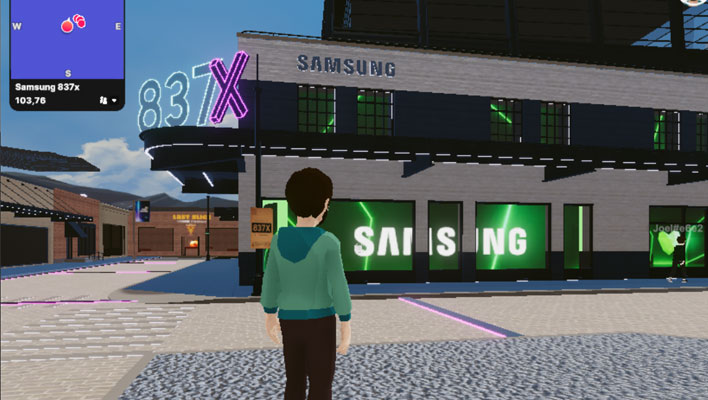 Samsung's Galaxy Unpacked 2022 event is scheduled for Wednesday, February 9 starting at 10:00am ET (7:00am PT). Outside of the metaverse experience, you can catch the livestream any of these 'traditional' destinations...
If you'd rather catch it in the metaverse, head over to Decentraland and either join as a guest (your information will be stored locally) or link your MetaMask wallet for the full experience. It takes a few seconds to load, but once you're in, you can start moving around. Press the "V" key to switch between first and third-person perspectives, and the "C" key to bring up a full list of controls.
We gave it a brief trial run and found it to be a smooth experience. Of course, Samsung's servers will get more heavily hammered during the actual event, so we'll have to wait and see how it performs then.
As to what you can expect, Samsung will be rolling out its next-gen flagship Android phones, likely called the Galaxy S22 series. In the meantime, Samsung is accepting Galaxy S22 reservations, which gets you a $50 credit "toward other Galaxy products during preorder."