Samsung announced today that it has officially launched its One UI 4 update to its family of Galaxy S21 smartphones. It says the update will deliver an elevated mobile experience that puts you in more control of your mobile experience.

As leaks and information about the upcoming Samsung Galaxy S22 begin to surface, Samsung has rolled out its latest UI 4 update to the Galaxy S21, Galaxy S21+, and the Galaxy S21 Ultra. The update is based on Android 12, which has already been released to many Google Pixel owners. Samsung's update will feel familiar in some ways to anyone that has seen or been staying up to date with the Android 12 release.

Samsung seems to be keeping with the theme of allowing users to express themselves in unique ways, much like "Material You" with Android 12. It introduces features such as new Color Palettes that users will be able to choose from, allowing people to match their phone's appearance to whatever they are in the mood for. You will be able to change the look and feel of the home screen, icons, menu, button and background.

Along with a new Color Palette, you can expect widgets that offer deeper customization, a larger assortment of emojis, GIFs and stickers as well. All of this is to make the experience of using your phone more personal and unique to each individual.

The update also includes new security and privacy features. These will include alerting you when an app attempts to access your camera. The Pixel 6 and 6 Pro have a similar feature in that they let the owner know the camera is in use by a green LED that glows on the top front of the phone. Another feature will be a new privacy dashboard that will have all your settings and controls easily located in one place. 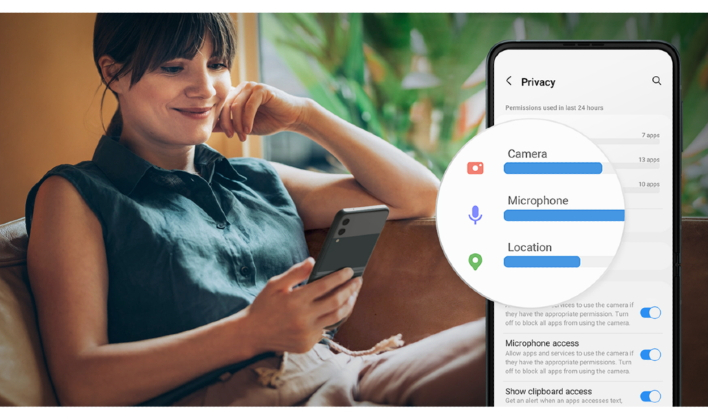 So that the experience feels seamless across all your Samsung Galaxy devices, you will be able to sync the same look and feel on your Galaxy smartphone with your Galaxy Watch or Galaxy Tab also. This same seamless experience is said to carry over to when you are using third party apps and services, as Samsung has partnered with other companies like Google.

If you are the happy (or even unhappy) owner of a Samsung Galaxy S21 you should start receiving the update today. Other Galaxy owners will have to wait a bit, however. Samsung says that it will be available on previous Galaxy S, Note series, Galaxy Z series, A series and tablets soon. If you own a Galaxy Watch, you should also expect an update today with enhanced health features and new watch faces.