Qualcomm this week unveiled its next-gen Snapdragon 888 system-on-chip, a mighty slice of silicon that will power future flagship smartphones, and lo-and-behold there is already some leaked benchmark data highlighting the chip. As you might of guessed, the benchmark numbers reside over at Geekbench's database, a common destination for leaks.
Part of what makes the Snapdragon 888 tick is its Kryo 680 CPU. According to Qualcomm, it delivers a 25 percent performance boost compared to the Kryo 585 CPU in the Snapdragon 865. It is based on Arm's powerful Cortex-X1 architecture and can hit clockspeeds of up to 2.84GHz. Additionally, it supports up to 16GB of LPDDR4x-2133 or LPDDR5-3200 memory.
The new entry at Geekbench gives us a first look at the chip's performance capabilities, when paired with Samsung's upcoming Galaxy S21 handset. Take a gander... 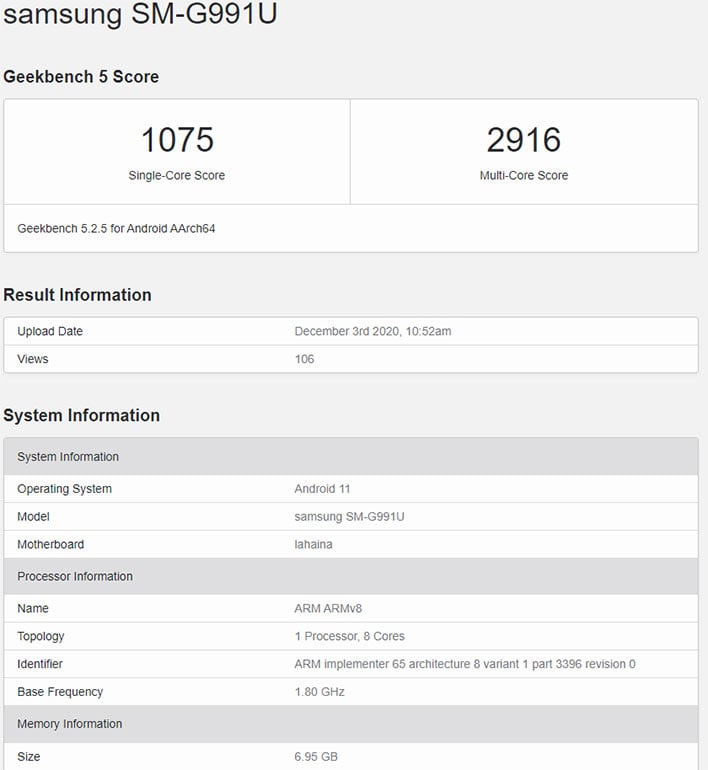 The Geekbench entry is labeled as an "SM-G991U" part, which is said to be one of the Galaxy S21 models on tap from Samsung. Likewise, the "Lahaina" motherboard (chipset, really) is the codename for the Snadragon 888. Put them together and you have a Galaxy S21 smartphone rocking Qualcomm's upcoming flagship processor.
According to the listing, this is an 8-core processor with a 1.8GHz base clock, flanked by 6.95GB of RAM. That likely translates to 8GB of RAM. It is running Android 11, with as single-core score of 1,075 and a multi-core score of 2,916.
There is some comparison data to be found in our Galaxy S20 Ultra review. Here's how some of it shakes out, sorted by single-core performance...
So based on our data, the leaked benchmark result is a strong showing for the Galaxy S21 and Snapdragon 888 (though it still does not catch up to Apple's A13 Bionic), considering how early it is—final performance is likely to be higher as Samsung and Qualcomm polish and optimized their respective products.
Rumor has it the Galaxy S21 will launch in January 2021, the same month as CES.