In October, we got to see what appeared to be renders of Samsung's upcoming Galaxy S21. The renders showed off a design that represented an evolution of Samsung devices that came before it, so we were not entirely sure if they were real or not. Prominent leaker IceUniverse on Twitter found some evidence that leads us to believe that the Galaxy renders were indeed accurate. He has now tweeted out phone case renders that look exactly like the Galaxy S21 images from October.

The main design feature that sets these renders apart is the stack of three cameras with the flash offset to the right. The only time we saw this design was with the October renders, so this must be the Samsung Galaxy S21.

Outside of the cameras, though, there is not much else in the way of information gained from this leak. It does pretty well seal the deal on how the Galaxy S21 will look, and some people like it while others are more dismissive. It is interesting to see how people are reacting overall, though, especially on Twitter. 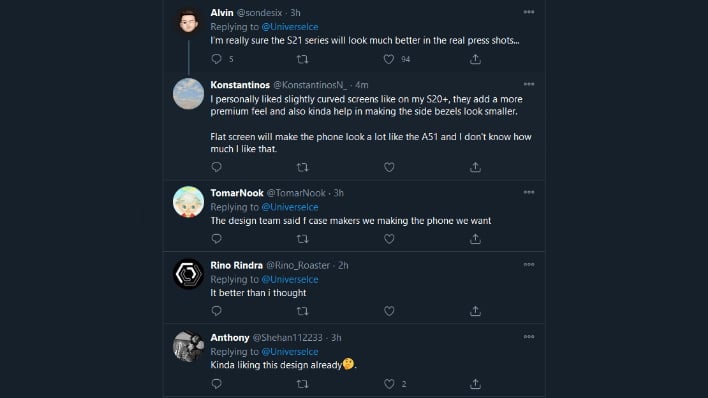 Whether or not you like the design of the purported Samsung Galaxy S21, if case renders for the phone are leaking, we are getting closer to its actual launch. Moreover, major changes to the design are not going to occur unless something catastrophic happens. While we wait on Samsung's official word about the Samsung Galaxy S21, let us know what you think of its design in the comments below.