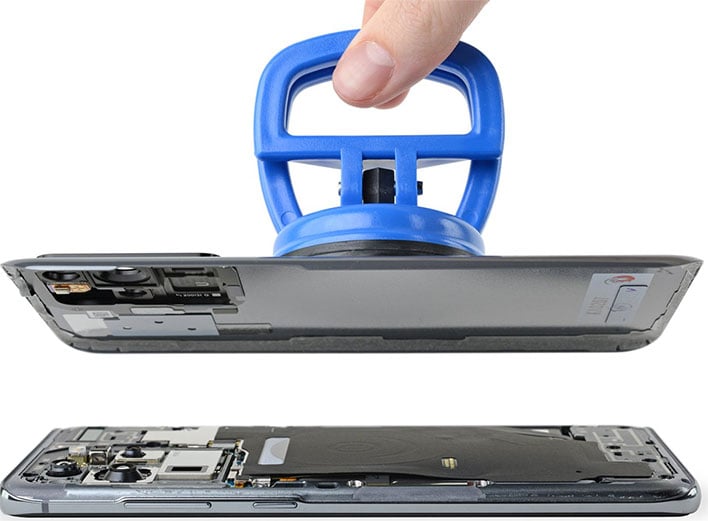 The Galaxy S20 Ultra is Samsung's newest flagship phone, and it is absolutely brimming with high-end features, with a premium price to match. Some of those features are highlighted in a recent teardown of the $1,399 phone, including the epic camera array—we've taken some photos with it (we're currently putting together a review) and it's awesome. The teardown analysis also underscores why replacing the built-in battery is not a viable option for most people.
I won't go so far as to say consumers have essentially sold their souls in exchange for premium phones that eschew easy do-it-yourself (DIY) repairs for glass and metal bodies, and increasingly thinner and lighter profiles. But the demand for today's elegantly manufactured phones have certainly come at a cost. Perhaps the biggest one is the dismissal of easy battery swaps.

Before we get into the nuts and bolts of the teardown, let's quickly recap the pertinent specs of the Galaxy S20 Ultra...
It's an absolute beast from top to bottom, and the folks at iFixit took it upon themselves to crack one open and gut the high-end device. What did they find?
To begin with, a lot of glue. Getting inside the Galaxy S20 Ultra required the usual steps—heating up the phone to loosen the adhesive, which the teardown gurus noted "seems tougher than usual for Samsung," and then lifting off the rear chassis with an ultra-sized suction cup. It's a process for sure, though in this case, it came "without any cable-snapping booby traps." 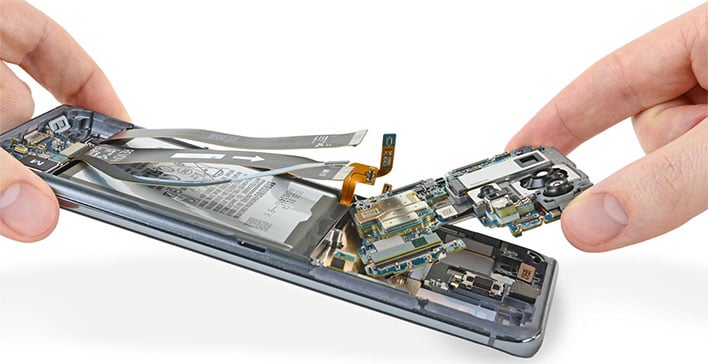 One of the more interesting finds inside the Galaxy S20 Ultra is a stacked motherboard design. By going this route, Samsung is able to fit more goodies inside its flagship phone without making it extra wide or long. And make no mistake, there are a lot of parts and chips inside this thing, including a 5G modem, 5G power amplification modules, flash storage, RF front-fend module, a Wi-Fi and Bluetooth module, and a whole bunch of power management ICs, to name a few. 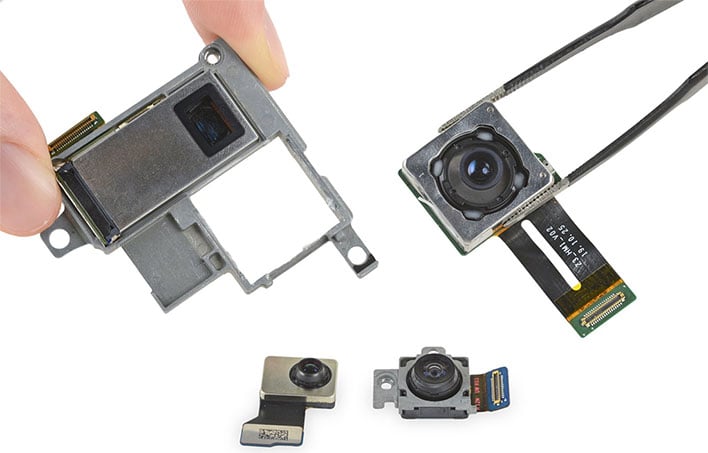 What's also interesting is how Samsung went about cramming so many cameras in the relatively thin Galaxy S20 Ultra.
"How do you fit a stack of zoom lenses into a smartphone that's only 8.8mm thin? Samsung says: turn it sideways. Instead of focusing your image directly onto the sensor, this camera uses a prism to bounce the light sideways at a 90-degree angle," iFixIt notes.
It's a clever arrangement. Once light passes through a prism, which is equipped with its own optical image stabilizer, it is beamed through a sliding box full of zoom lens and hits the sensor mounted inside. It's pretty remarkable what smartphone makers are able to accomplish in such tight confines. 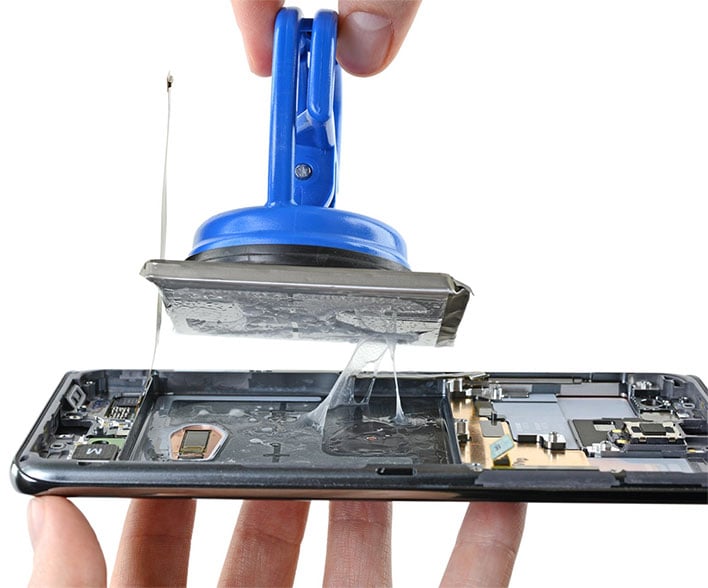 While we can marvel at the overall design and engineering feats, there are trade offs, as we alluded to earlier. In this case, getting at the 5,000 mAh battery and replacing it is difficult. Opening the Galaxy S20 Ultra is not exactly easy to begin with, but if you work your way to the battery, you'll be met with a bunch of glue holding it down.
From iFixIt's vantage point, trying to swap out the battery in the Galaxy S20 Ultra is "tougher than ever, especially with board interconnect cables to work around," in addition to the adhesive. That's a bummer, because replacing the battery is probably the main reason why a person would attempt to open a smartphone in the first place.
In the end, the Galaxy S20 Ultra earned a low 3 out of 10 Repairability Score. Part of the reason is because "every repair starts with painstaking un-gluing the the fragile glass rear cover," and it just trickier from there. On the plus side, however, the Galaxy S20 Ultra won kudos for using identical Phillips screws, so only one driver is needed.