There is little doubt the eventual Galaxy S11 will debut with Samsung's recently introduced Exynos 990 system-on-chip (SoC) inside (for the international model, anyway). Lest anyone needs reassuring of this, however, a leaked benchmark entry in Geekbench's database provides a bit of proof (albeit unofficial, of course).
The Geekbench entry lists the model number as SM-G986B, which is believed to be the 5G version of the Galaxy S11. In addition to having Samsung's latest generation silicon inside, the listing also shows the phone being equipped with 12GB of RAM and running Android 10, none of which comes as a surprise for a next-gen flagship.
There is no indication of how much storage is inside this particular model—we imagine it's 512GB or 1TB, though 256GB and 128GB are both possibilities as well. Also note that even though there is 12GB of RAM on the Galaxy S11 5G, that does not necessarily mean the 4G LTE version will have that much RAM as well.
In any event, here is a look at the Geekbench (version 5.0.3) scores... 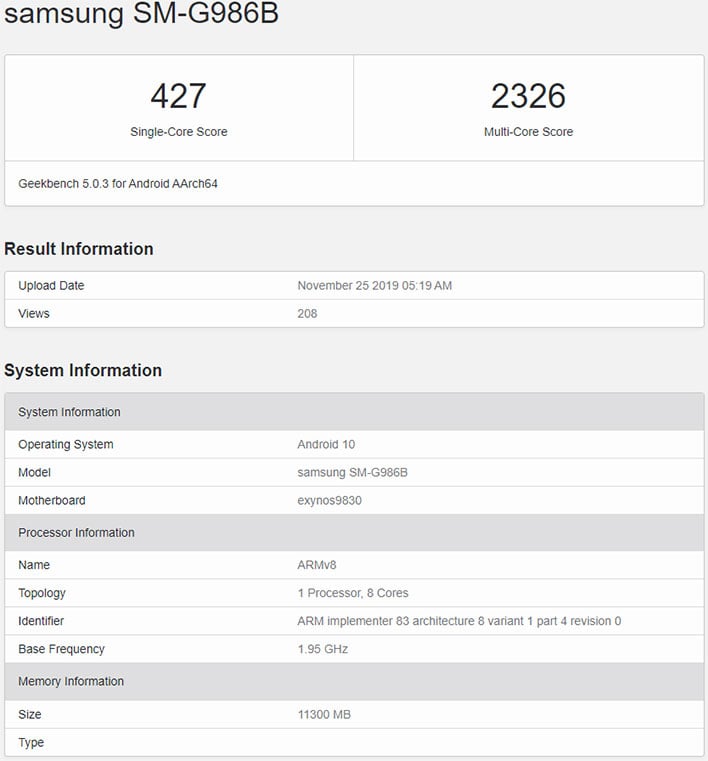 The scores are roughly on par with the current generation Galaxy S10+. For example, one of the most recent additions to the Geekbench database from a Galaxy S10+ shows it scoring 738 in the single-core test and 2,150 in the multi-core test. That's with a Qualcomm Snapdragon 855 underneath the hood.

It's a bit early to draw any conclusions about performance. As to the Exynos 990, it is built on a 7-nanometer EVU manufacturing process with a tri-cluster CPU structure consisting of two custom cores, two high-performance Cortex-A76 cores, and four power-efficient Cortex-A55 cores. These are paired with an ARM Mali-G77 GPU and a dual-core neural processing unit (NPU) for on-device artificial intelligence (AI) chores.
Past leaks point to there being five different Galaxy S11 models in three sizes. If the reports are true, three of them will feature a 5G model, and two of them will stick with 4G LTE. All of them will feature curved-edged displays.
It will still be a few months before Samsung gets around to formally introducing the Galaxy S11. In the meantime, we expect the leaks to keep flowing.