Samsung Debuts Galaxy A71, A51 Mid-Range Phones With Infinity-O Displays And Quad Cameras 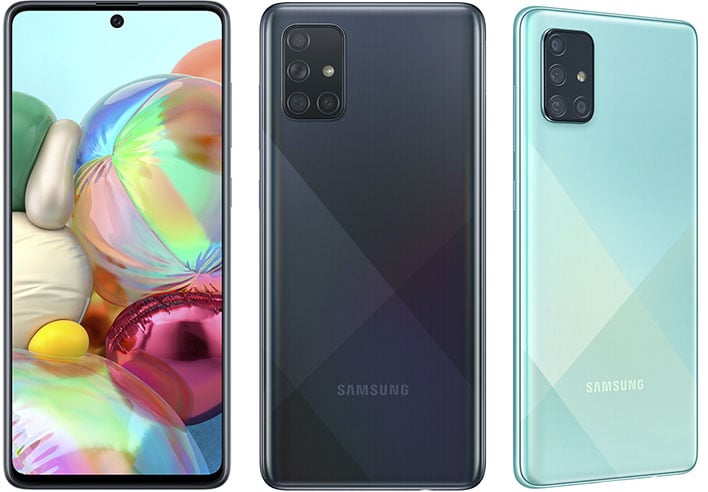 If smartphones were free, most people would flock to the top-end models with all of the bells and whistles. They are not free though—far from it—and while some models command upwards of $1,000, less than 10 percent of Americans pay that much for a phone. Cheaper options are necessary, and that is what Samsung is offering with its new Galaxy A71 and Galaxy A51 handsets.
These are the latest additions to Samsung's Galaxy A-series, and both are mid-range phones with some interesting features. For example, the Galaxy A71 and Galaxy A51 both sport an Infinity-O display with a 2400x1080 resolution (20:9 aspect ratio), both wield four rear cameras for taking high quality photos, and both ship with Android 10 + One UI 2.0 out of the box.

Similarities aside, these are not identical phones. The Galaxy A71 (shown above) is the larger of the two, with a 6.7-inch display. It's powered by an octa-core processor (two cores clocked at 2.2GHz + six cores clocked at 1.8GHz) and either 6GB or 8GB of RAM. It also has 128GB of onboard storage.
For snapping photos, the punch-hole in the front houses a 32-megapixel sensor (f/2.2 aperture). Around back, the quad-camera arrangement consists of a primary 64-megapixel sensor (f/1.8), an ultra-side angle 12-megapixel sensor (f/2.2), a 5-megapixel depth sensor (f/2.2), and a 5-megapixel macro sensor (f/2.4). A 4,500 mAh battery rounds things out.
The Galaxy A51 is similar overall, but slightly smaller with a 6.5-inch display. It's powered by a Samsung Exynos 9611 system-on-chip (SoC) and is available with 4GB or 6GB of RAM. For storage, it comes with 64GB or 128GB.
Camera chores are handled by the same 32-megapixel sensor in the front, but instead of a primary 64-megapixel shooter in the rear, it features a 48-megapixel camera (f/2.0). The three other sensors are the same as the Galaxy A71. Finally, the battery less capacious at 4,000 mAh.
Samsung did not say when exactly these new models will be available or how much they will cost, but you can bet they will ring in well under a grand.