The HotChips 33 symposium is currently underway, and some of the hottest names in tech are giving us insight into their product roadmaps. One such company is Samsung, one of the most prolific manufacturers of high-speed memory and NAND storage products for the PC industry.

The company revealed its intentions to release its bodacious 512GB DDR5 module that operates at an incredible 7.2 Gbps later this year. Samsung is touting this development as a huge step forward compared to existing high-end DDR4 memory solutions. As you can tell by the maximum capacity of 512GB, these modules target the data center market.

Samsung claims that they outperform DDR4 across the board in areas like performance, capacity and voltage. For example, the 7.2 Gbps data rate is twice that of current-generation solutions, while performance and capacity see a 1.4x and 2x uplift, respectively. 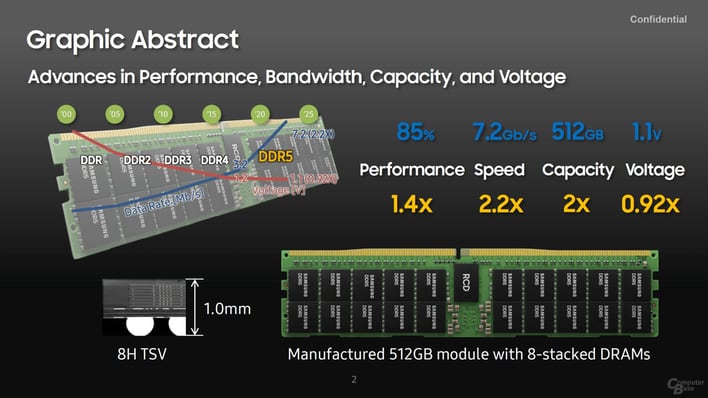 Samsung says that this level of performance and capacity was made possible with 8-stack Through-Silicon Vias (TSV) stacks. Samsung's current DDR4 modules use a 4-stack package with a height of 1.2mm. With the new 8-stack update, that height was reduced to 1.0mm. The gap between dies dropped by 40 percent, which helps to promote improved cooling efficiency.

According to Samsung, 512GB DDR5-7200 modules will enter mass production by the end of 2021, which means that we should see enterprise customers adopting the memory with new platforms in 2022 and beyond. 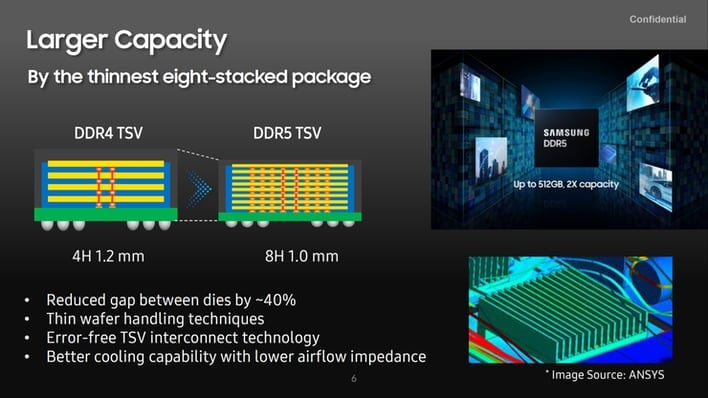 The PC industry is beginning the shift to DDR5 memory, which will first be supported with Intel's upcoming 12th generation Alder Lake consumer processor platform. For example, TeamGroup recently unveiled its T-Force Delta RGB modules for Alder Lake systems that will ramp to DDR5-5600 speeds in capacities up to 32GB.

DDR5 will eventually be used across all major PC computing segments from laptops, to consumer desktops, to enterprise/data center. As such, Samsung believes that DDR5 will become the dominant choice for all PC systems somewhere in the 2023 to 2024 timeframe.