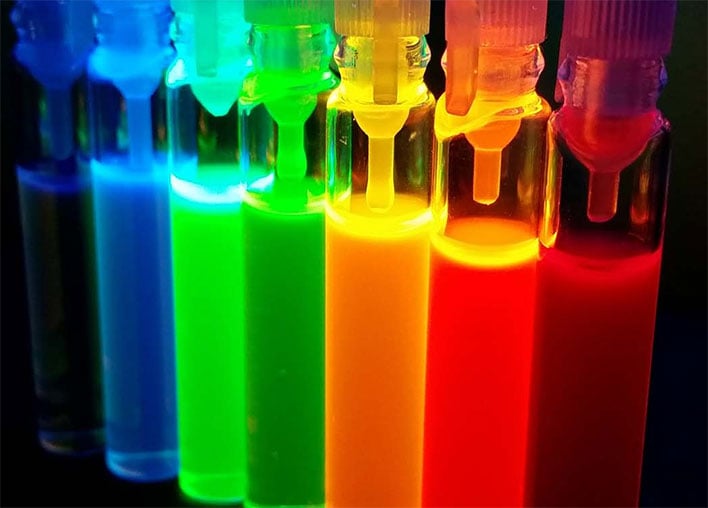 A company in the United Kingdom has received an influx of cash in its patent infringement lawsuit against Samsung, which was initially filed in February of this year. Nanoco, the company behind the lawsuit and which develops and manufactures cadmium-free quantum dot technology, is essentially taking aim at Samsung's line of QLED televisions.

Nanoco and Samsung have a bit of history together. According to a statement made by Nanoco chairman Christopher Richards earlier this year, the British firm "worked collaboratively with Samsung" to develop "enhanced quantum dots."
"We were therefore naturally disappointed when Samsung ended the collaboration and launched its QD-based televisions without entering into either a licensing or supply agreement with Nanoco," Richards said at the time, according to a Reuters report in February.
If Samsung hoped to bog Nanoco down in legal fees (and we're not saying it did), it will need a different strategy. Nanoco has retained multiple law firms in the US to represent the company, including one in Boston, Massachusetts, and another in Longview, Texas. Just as importantly, it has received funding from an unnamed but "very large US litigation finance specialist" with experience in this sort of thing.
What this essentially boils down to is free legal services for Nanoco, in exchange for sharing a portion of the settlement (if there ends up being one) with the funder.

"Under the LFA [Litigation Funding Agreement], the Funder will fund the costs of the litigation against Samsung. The LFA removes the funding burden for the suit from Nanoco and its shareholders. In return, the Funder can expect to receive a multiple of their invested capital in the event of a settlement or judgement in favor of Nanoco. Patent infringement cases can take 2 years or more to get to trial and cost many millions of dollars to prosecute.
QLED, or quantum light-emitting diode, is Samsung's take on quantum dot technology. As Samsung explains, quantum dots are nanoparticles added to layers of films, filters, glass, and electronics that comprise an LCD screen. These little dots range in size from 2-10nm. At their best, quantum dots enable colorful and vibrant displays that are closer to OLED than non-quantum-dot displays.
It's not clear how much Nanoco is seeking from Samsung in its lawsuit.