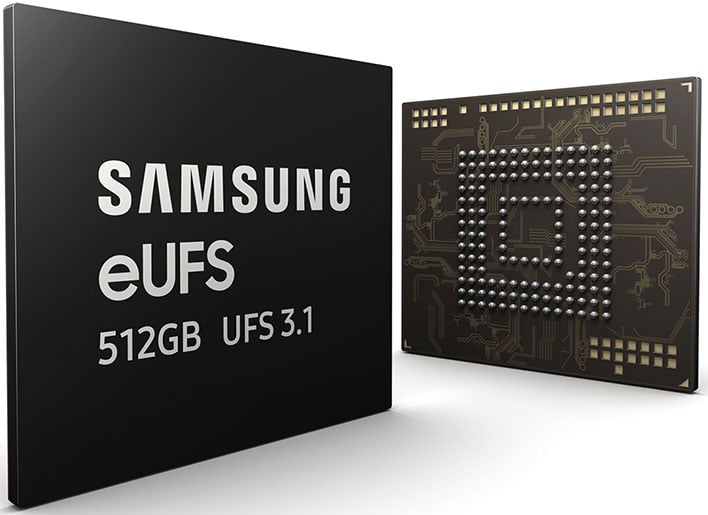 Samsung on Tuesday announced it has started mass producing the industry's first 512-gigabyte (GB) embedded Universal Flash Storage 3.1 (eUFS 3.1). It will find its way into future flagship smartphones, bringing with it much faster sequential write speeds, along with better random read and write performance compared to 512GB eUFS 3.0.
"With our introduction of the fastest mobile storage, smartphone users will no longer have to worry about the bottleneck they face with conventional storage cards," said Cheol Choi, executive vice president of Memory Sales and Marketing at Samsung Electronics."The new eUFS 3.1 reflects our continuing commitment to supporting the rapidly increasing demands from global smartphone makers this year."
According to Samsung, its 512GB eUFS 3.1 storage delivers sequential write speeds of up to 1,200MB/s. That is a threefold improvement over the 410MB/s that Samsung's previous generation 512GB eUFS 3.0 delivers. Sequential writes remain the same at 2,100MB/s, but is not really disappointing since that is already a high bar. 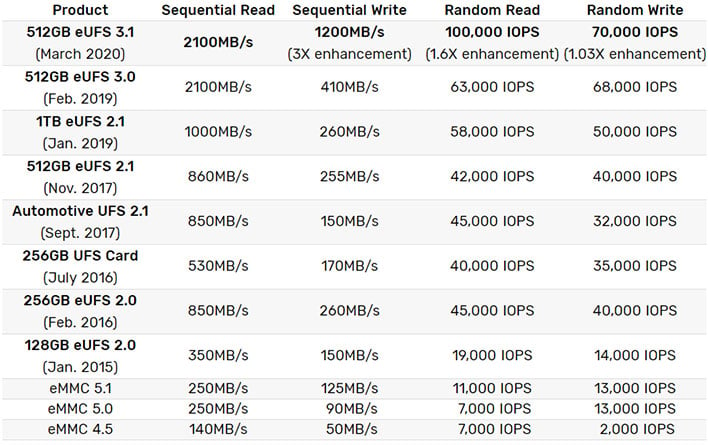 Samsung has been able to steadily increase the performance of its embedded storage memory solutions over the years. Compared to just over two years, its new 512GB eUFS 3.1 offers more than twice the sequential read performance and nearly five times the sequential write performance, versus Samsung's 512GB eUFS 2.1 released in November 2017.
The storage maker also points out that its mass-produced 512GB eUFS 3.1 embedded memory is more than twice as fast as a SATA-based SSD when it comes to sequential writes, and over 10 times faster than a UHS-1 microSD card (90MB/s).
"This means consumers can enjoy the speed of an ultra-slim notebook when storing massive files like 8K videos or several hundred large-size photos in their smartphones, without any buffering. Transferring contents from an old phone to a new device will also require considerably less time. Phones with the new eUFS 3.1 will only take about 1.5 minutes to move 100GB of data whereas UFS 3.0-based phones require more than four minutes," Samsung says.
It's nice to see Samsung continuing to crank out faster embedded memory solutions, especially as the market transitions to 5G applications. Granted, it will still be a bit before 5G connectivity if fairly ubiquitous, but the market is definitely headed in that direction.
In addition to a 512GB option, Samsung says it will also have 256GB and 128GB eUFS 3.1 solutions available for flagship phones released this year.