We had a lot of good things to say about the camera performance on the Galaxy S21 5G, which packs a 64-megapixel shooter among its array of lenses. The Galaxy S21 Ultra 5G goes even further with a monstrous 108-megapixel sensor on the rear, but even if you add them both together, Samsung's new ISOCELL HP1 offers up even more pixels—as in, a whopping 200 megapixels.
Photographers will be quick to point out that megapixel-count is just one component, and that taking great photos lies beyond the specifications. That's true, but specs aren't meaningless, either. The higher the pixel count, the more detail can be captured, which can especially be helpful when zooming into shots on your camera roll in post processing.
What's equally impressive about a 200-megapixel sensor is having access to it on a smartphone. The ISOCELL HP1, which is based on Samsung's most advanced 0.64μm-sized pixels, is the first mobile image sensor to support 200-megapixel photography for ultra high-resolution photo taking from a handheld device. 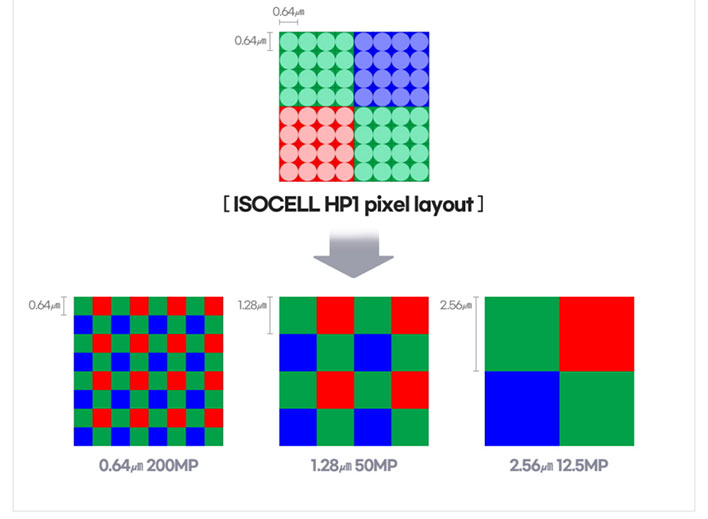 This is also supposed to be superb at low-light photography. This is accomplished in part through what Samsung calls its new ChameleonCell technology. This is described as a pixel-binning technology that employs a two-by-two, four-by-four, or in the case of the 200-megapixel sensor, a full pixel layout.
"In a low-lit environment, the HP1 transforms into a 12.5-megapixel image sensor with large 2.56μm pixels by merging 16 neighboring pixels. The newly formed 2.56μm pixel is capable of more light absorption and sensitivity, producing brighter and clearer photos in in-doors or in the evening. In bright outdoor environments, the sensor’s 200-million pixels can capture ultra-high-definition photography on mobile devices," Samsung explains.
Outside of taking photos, the ISOCELL HP1 can also record 8K resolution videos at 30 frames per second with very little loss in the field of view, according to Samsung. It does this by merging four neighboring pixels to reduced the resolution to 50 megapixels, or 8192x6144, to take 8K (7680x4320) video without having to crop or scale down a full image resolution.
Samsung also unveiled a new ISOCELL GN5, the industry’s first 1.0μm image sensor to integrate Dual Pixel Pro, an all-directional autofocusing technology. Both it and the ISOCELL HP1 are currently sampling to customers, so hopefully we'll see them employed soon.
How soon? Both are candidates for Samsung's eventual Galaxy S22 series. Samsung is prepping a Galaxy S21 Fan Edition (FE), which is reported to have an in-display fingerprint scanner, while the Galaxy S22 is rumored to go into production in November of this year for a launch in January 2022.