On Wednesday, February 23rd, Russia announced its invasion of Ukraine through a "special military operation." Since then, fighting has continued in Ukraine, and amidst the turmoil, hacking groups in the region and around the world have taken sides, threatening cyberwar against Russia, Ukraine, or the United States.

Following the first day of fighting in Eastern Europe, hacking collective Anonymous, known for its Guy Fawkes masks and events such as "Troll ISIS Day," has taken a stance on the situation. On Twitter, the group announced that it is "officially in cyber war against the Russian government," sparking excitement in the replies. One day after this announcement, the group seemingly claimed responsibility for taking the Russian Ministry of Defense website offline. Furthermore, the group may have also taken down the Kremlin website and compromised Russian TV stations to play Ukrainian songs. However, it is unknown who is behind these attacks at this time, according to VXUnderground on Twitter.

On the opposite side of the war, ransomware gang Conti initially announced on February 25th that it is in "full support of Russian government." The post on the gang's website explained that if anyone organized a cyberattack or any war activities on Russia, the group would use "all possible resources to strike back at the critical infrastructures of an enemy." However, the group's tone seemed to shift only a few hours later, when it was explained that the group does "not ally with any government and condemns the ongoing war," but will use its full capacity to retaliate against "Western warmongers" and "American cyber aggression."


Conti ransomware gang has announced that they fully support the Russian government and will take revenge on anyone who conducts cyberattacks on Russia. pic.twitter.com/u1VwPVQULO


Besides Conti, it appears that individuals are beginning to fight in cyberspace against Russia and Ukraine. Yesterday, the BBC reported on a Russian vigilante hacker who, with a team of six, "temporarily brought down a number of Ukrainian government websites, by flooding servers with data in denial of service (DDoS) attacks." Moreover, this group reportedly sent bomb threats to 20 schools, hacked into the live feeds of a Ukrainian "rapid response team," and set up official Ukrainian government emails using Ukrainian email servers.

On the Ukrainian side, calls for volunteer defensive security professionals have gone out from Ukraine's Defense Ministry. Yegor Aushev, the co-founder of a Kyiv-based cybersecurity company, sent out the call to action at the behest of a Defense Ministry official who initially contacted him on Thursday. However, Reuters reports that the Ukrainian government did not respond to the request for official comment on the matter.


#Russia as of 9:00 a.m. UTC; the incident comes as the government clashes with social media platforms over policy in relation to the #Ukraine conflict 📉
📰 Report: https://t.co/ihPX8fb86s pic.twitter.com/nGrcHzjIXd
— NetBlocks (@netblocks) February 26, 2022

In the middle of these aggressors and their proxy cybergroups lie the civilians in Ukraine and Russia who have been greatly affected. For example, it is now believed that Russia has begun to cut off its citizens' outside access to the world by blocking platforms such as Twitter, as shown above. As for Ukraine, internet service has been disrupted across the country, with heightened problems in the southern and eastern parts of the country. While this can be attributed to the initial invasion, there could also be ongoing cyberattacks and incursions from Russia disrupting internet service. This, in turn, restricts communication and could potentially hinder the flow of intelligence and block citizen-soldier coordination giving Russia a slight upper hand. 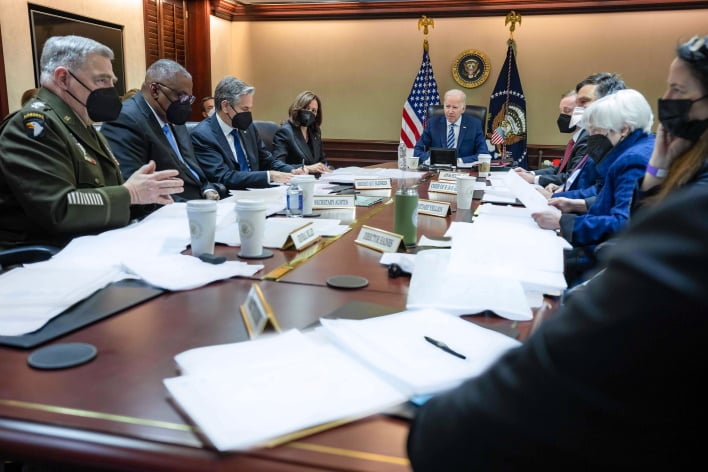 Looking toward the West, President Joe Biden is reportedly contemplating cutting off Moscow from SWIFT, the global backbone for financial transactions. While this could have a significant impact on Russian activities, this could also have severe ramifications for the United States. Besides groups such as Conti threatening to breach United States' infrastructure, cutting off Moscow from SWIFT could be considered an act of war. Despite this concern, it is unclear if the strength of its military and the will of its people will prevent Russia from acting upon new sanctions such as these.

With cyberspace becoming an increasingly more important domain for warfare, it seems everyone is slowly learning how to navigate the many factors at play. In the coming 48 hours, it will be worth watching what the West does in terms of new sanctions and how Russia responds. Further, it will be interesting to see if any of the aforementioned hacking groups hold their word or, for the ones in Russia, are only in it for the support and protection of their home country.