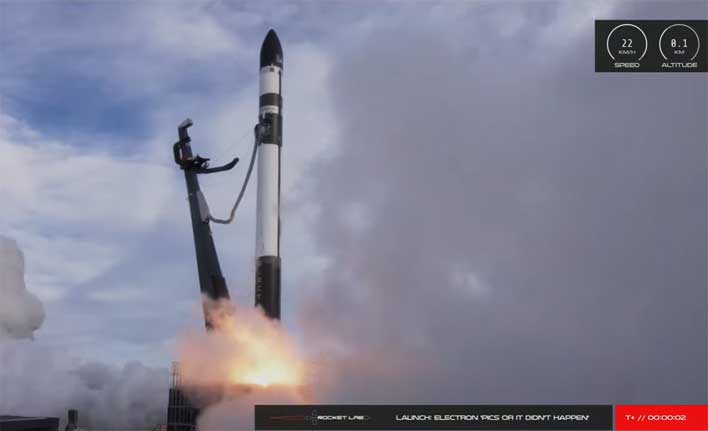 Rocket Labs is one of several companies out there who specialize in putting customer satellites into orbit for much less money than traditional launch platforms. The small rockets the company uses generally place multiple satellites from different companies into space using shared launch vehicle, which helps to reduce costs. Recently Rocket Lab was set to launch its thirteenth mission, and things appeared to go well for the first stage of the launch. Ultimately, something happened with the rocket’s second stage and it along with all satellites onboard were lost.

An issue was experienced today during Rocket Lab's launch that caused the loss of the vehicle. We are deeply sorry to the customers on board Electron. The issue occurred late in the flight during the 2nd stage burn. More information will be provided as it becomes available.

The Electron rocket took off at 5:19 PM ET from a launch facility in New Zealand on the Mahia Peninsula. The issue with the rocket occurred about six minutes into the launch. The first sign of a problem was a stalled live video feed from the rocket, then telemetry data indicated that the rocket started to lose speed and altitude.

Rocket Lab later announced via Twitter that an issue with the rocket led to the loss of the entire vehicle. The company apologized in the Tweet to the customers who had lost their satellites in the failed launch. The issue that led to the loss of the rocket happened late in the flight during the second stage burn, and Rocket Lab has promised more information when it is available.

Rocket Lab CEO Peter Beck took to Twitter to confirm that the rocket had been lost and noted that he was sorry that the company failed to deliver the customer satellites into orbit. Beck also vowed that Rocket Lab would find the issue, correct it, and be back on the launch pad soon.

We lost the flight late into the mission. I am incredibly sorry that we failed to deliver our customers satellites today. Rest assured we will find the issue, correct it and be back on the pad soon.

In other private space flight news, SpaceX successfully docked its Crew Dragon spacecraft with the ISS in May, giving the U.S. the ability to put astronauts into space for the first time since the retirement of the Space Shuttle fleet.