The best recipes combine different ingredients that may or may not seem like they go together, and then out comes something wonderful. This does not apply to just food, either. Case in point, a modder/maker found a delightful way to combine retro gaming (awesome), Spotify (also awesome), and alcohol (mmm, booze!) into a single delightful project.
Meet the RetroPie Barrel Arcade. This is something we never knew we wanted, but now that we have seen its existence, this will permeate our daydreams until we get the gumption to construct something similar ourselves. Or maybe it's just me (this ranks as my favorite mod/maker project). So, what exactly are we looking at?
It starts with the barrel, which looks like it was plucked straight out of Donkey Kong. Reddit user breadtangle obtained the wooden barrel through a local classified ad, and turned into a retro gaming platform using a Raspberry Pi 3 B+ and RetroPie, the latter of which makes it easy to build a custom classic game console. Other hardware includes USB joysticks, Logitech Z506 speakers, and a leftover countertop obtained from a "local kitchen place."
At this point you might be thinking, 'That's cool and all, but does it actually hold booze?' You bet it does! Have a look... 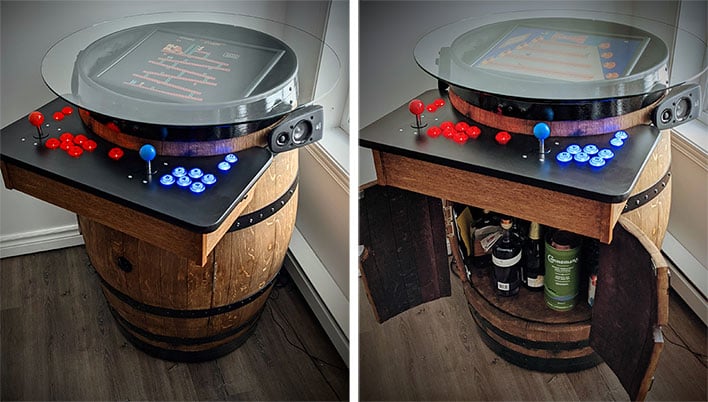 The maker carved a pair of doors into the barrel, and fashioned hinges that "required some effort to get properly aligned." If our eyeballs do not deceive us, there is champagne and some single match scotch tucked inside, among other libations ready to be consumed with friends (who are of the legal age, of course).
"By far the hardest part of this build was figuring out all the curves where the controls attach to the barrel. I came up with a handheld jigsaw jig for the circular cuts, but the vertical parts of the box that intersect two simultaneous curves were basically hand-carved with a flap-disk sander," breadtangle explains. 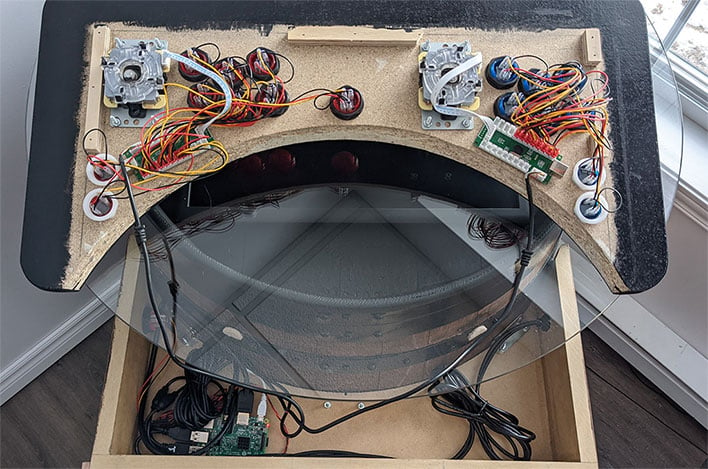 It's not quite as neat and tidy on the inside as it looks on the outside, but hey, kudos for making the hardware and cabling easy to access. There is a soft-power switch for the Raspberry Pi on the left of the barrel, and extra USB ports on the back.
"I could not be happier with the results. We use it all the time, with the #1 game being Tetris Attack for the SNES (if you haven’t tried it head-to head, you really should). My daughter likes Lemmings on any platform," breadtangle says.
On top of retro gaming and storing booze, this barrel of fun has the ability to play Spotify tunes streamed from the user's phone. And because it has five speakers and a subwoofer, "it fills the room!"

Now if only the maker could mass produce this thing and strike a deal with Walmart, we'd bring one of these home in a heartbeat.