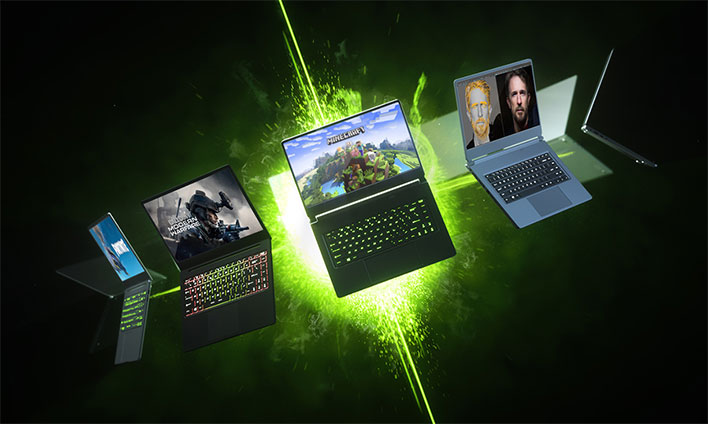 It is incredibly difficult to find a GeForce RTX 30 series card in stock from a seller that has not jacked up the price, but eventually things will settle down. Hopefully sooner than later. Also happening presumably sooner than later—NVIDIA will launch Ampere in mobile form for laptops. As we wait, a retailer in Europe has already posted preorder listings for laptops with mobile GeForce RTX 30 series GPUs inside.
To be clear, NVIDIA has not yet launched or even acknowledged a mobile Ampere lineup. We know a launch is coming, however, because (A) it would be silly and bad for business to skip this generation in the mobile sector, and (B) leaks and rumors have been piling up. And typically where there is smoke, there is fire (as was the case with the GeForce RTX 3060 Ti, which was profusely leaked ahead of its actual launch).
This is an enticing proposition, considering what we have seen from Ampere on the desktop. The GeForce RTX 30 series offers a big jump in performance per dollar compared to the previous generation GeForce RTX 20 series (Turing), particularly in ray-traced workloads. If the same applies to the mobile variants, then gaming laptops are about to get a big boost.
As for the preorder listings, here is a look at two of them...

Dutch retailer Skikk listed eight different configurations, ranging in price from €1,699 to €2,599, which works out to around $2,080 to $3,180 in U.S. currency. And here is a list of unannounced GPUs that comprise the eight listings...
There are some things to note here, in terms of how the mobile GPUs compare to their desktop counterparts. Starting at the bottom, a regular (read: non-Ti) variant of the GeForce RTX 3060 does not exist, at least not yet. However, the GeForce RTX 3060 Ti desktop GPU sports 8GB of GDDR6 memory, which is 2GB more than the non-Ti mobile version, if these listings are accurate.
Sitting in the middle of the pack, the GeForce RTX 3070 Max-Q, as listed, sports the same amount and type of memory as the desktop model (8GB of GDDR6). And at the top of the pack, the GeForce RTX 3080 Max-Q is shown as having 16GB of GDDR6 memory, while the desktop version sports 10GB of GDDR6X memory.
It will be interesting to see how these parts compare to their desktop brethren, both in terms of the specifications and overall performance capabilities. It's also worth noting that each of the eight preorder listings pair an Ampere GPU with an Intel Core i7-10875H CPU, whereas we have seen prior leaks showing Ampere in mobile form sitting pretty next to upcoming mobile Zen 3 (Cezanne) CPUs from AMD, including ASUS Zephyrus and TUF Gaming models.
When will they be available? Early next year, hopefully. According to the retailer listings, two of the models will ship in January or February 2021, while the rest are shown as arriving in the first quarter.