Believe it or not, the image shown above is doctored. I know, I know, it looks authentic! But as of this writing, Apple has not formally introduced an M2 processor—-its custom Mx silicon lineup still consists of the M1, M1 Pro, M1 Max, and M1 Ultra. That said, it's completely within the realm of plausibility that Apple will unveil an M2 processor at today's WWDC 2022 event, possibly hinted by a handful of 'hidden' retail listings.
There are at least three supposed placeholder listings for M2 powered Apple devices at B&H Photo, a popular retailer located in New York. They include a 13-inch MacBook Pro with 8GB of RAM and 256GB of built-in storage, a 14-inch MacBook Air with the same RAM and storage allotment, and a Mac Mini also with 8GB of RAM and 256GB of storage. 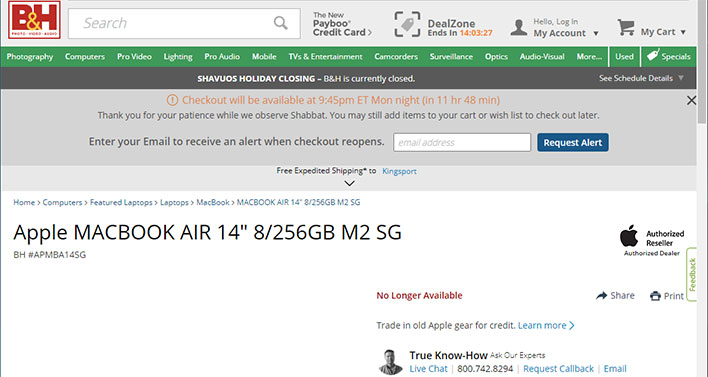 None of the listings show up with a typical search query, but they are each viewable to the public. It's possible these are just placeholder listings in case Apple announces M2 powered hardware at today's event, or even a (successful) ploy to draw attention to the retailer. However, it's worth noting that rumors of M2 powered MacBook Pro and MacBook Air devices surfaced several months ago.
Going back even further (more than a year), it was reported in April 2021 that M2 chips had entered into the mass production phase for next-generation MacBook Pro models. So it wouldn't surprise me in the least bit of Apple did actually unveil its M2 silicon today, along with a few product updates based on its latest custom SoC.
In addition to the MacBook Air, MacBook Pro, and Mac Mini listings at B&H Photo, there's also a product page for an unannounced Mac Mini Tower with an M1 Pro inside. Like the other listings, there are no accompanying pictures or pricing information displayed.
This year's WWDC event commences today starting at 1:00pm ET (10:00am PT). Apple is expected to introduce several software upgrades, including iOS 16, iPadOS 16, and WatchOS 9, and of course hardware launches are fair game.