Take-Two Interactive is definitely not a fan of “Hot Coffee”, and no, we are not talking about your favorite Starbucks order. Take-Two recently demanded that a Red Dead Redemption 2 mod with sexual themes be removed. The Red Dead Redemption 2 mod “Hot Coffee” allows players to have physical intercourse with women in the game. The game already includes some nudity and brief sexual content, however, players themselves are not permitted to engage in it.

This Red Dead Redemption 2 mod is inspired by the minigame “Hot Coffee” from Grand Theft Auto: San Andreas. Carl "CJ" Johnson, the main character in GTA: San Andreas, takes one of his girlfriends out on a date. The girlfriend then invites CJ into her home for “coffee”. The minigame was disabled, but it was added as a mod for PC versions of the game in June 2005. Other gamers quickly found ways to play the minigame on their consoles.

The original “Hot Coffee” mod led to quite a bit of outrage. A grandmother who purchased the game for her teenage grandson claimed that the original “M” rating was misleading. She consequently filed a class action lawsuit. Politicians and protesters demanded greater scrutiny and enforcement of the ESRB ratings system. The Federal Trade Commission (FTC) was even asked to investigate Rockstar Games to determine whether they had purposely lied about their rating. 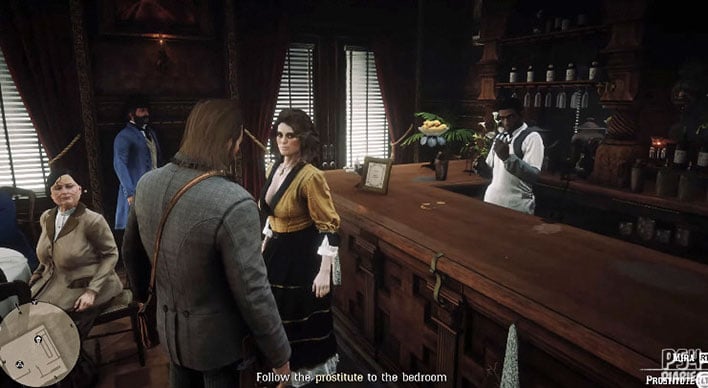 The rating of GTA: San Andreas was changed from Mature (M) to Adults Only (AO) and the game was removed from many retailers. Rockstar eventually released a patch that completely removed the minigame. They were able to reclaim their Mature rating once the patch was released and settled a variety of lawsuits.

It is therefore little wonder that Take-Two Interactive and Rockstar are leery of this fan-made Red Dead Redemption 2 mod. The modders were reportedly told by legal representatives that they had violated the game’s end-user license agreement (EULA). The modders had violated the EULA by "decompiling, preparing derivative works based on, or otherwise modifying the software" and "creating, uploading, or posting material that is vulgar, obscene, sexually oriented…" The legal representatives requested that the mod be taken down.

One modder named "Unlosing" has spoken about the controversy. They believe that Take-Two and Rockstar are behaving unfairly. They noted that the mod does not include nudity and only "only uses assets that are still in the game" like the moans that characters emit when they are injured. Furthermore, the mod is only for single-players. Unlosing added, "I find it crazy how Rockstar Games can add hookers to its games, but when someone uploads a mod (not even of the same quality) it’s suddenly 'inappropriate'".

This is not the first time Take Two has put a stopper on fan-made projects. The company recently filed a lawsuit against developer Jonathon Wyckoff. Wyckoff was working on a project that would enhance the graphics of Red Dead Redemption and make it playable on PC. The original game could only be played on PC through services like Playstation Now. Wyckoff has since canceled the project.