These days, chip architectures like Bulldozer are ancient history, as AMD has found its moment of Zen. So too have several hardware partners. That includes Razer, which at long last is apparently preparing to launch its first AMD-powered laptop as previously rumored. The timing could not be better, either, because AMD's Zen 3 architecture is the real deal.
To be crystal clear, Razer has not announced any plans to launch a Blade laptop with Zen 3 inside. Models that are currently available in 17-inch, 15-inch, and 13-inch form factors all sport Intel CPUs, including Comet Lake, Ice Lake, and Tiger Lake options, depending on the specific configuration. AMD processors are nowhere to be found.
Well, not on any of Razer's laptop pages, anyway. But hidden somewhere in 3DMark's database are at least two entries linking an unreleased Razer laptop configuration with a Ryzen CPU inside. There were spotted by @_rogame, a prominent leaker who posted partial screenshots of the listings, but did not link to the source (we searched high and low, and could not find the listings).
Here's a look at the the higher-end config...

The laptop, identified as a Razer model with a "Razer PI411" motherboard, is shown pairing an AMD Ryzen 9 5900HX processor with a mobile GeForce RTX 3070 GPU. This is said to be a Max-Q configuration, with a 780MHz base clock speed and 1,500MHz memory frequency. These specifications coincide with an 80W power envelope.
As for the CPU, the Zen 3 part is an 8-core/16-thread model with a 3.3GHz base clock and 4.6GHz max boost clock. It also sports 16MP of L3 cache. Pairing it with a GeForce RTX 3070 Max-Q GPU in a presumably thin profile is an attractive proposition.
We don't get any benchmark data here, though there is one final bit of potentially revealing information to glean from this entry. The "PI411" designation possibly indicates this marks a return of the Blade 14, which has not seen a refresh in several years. 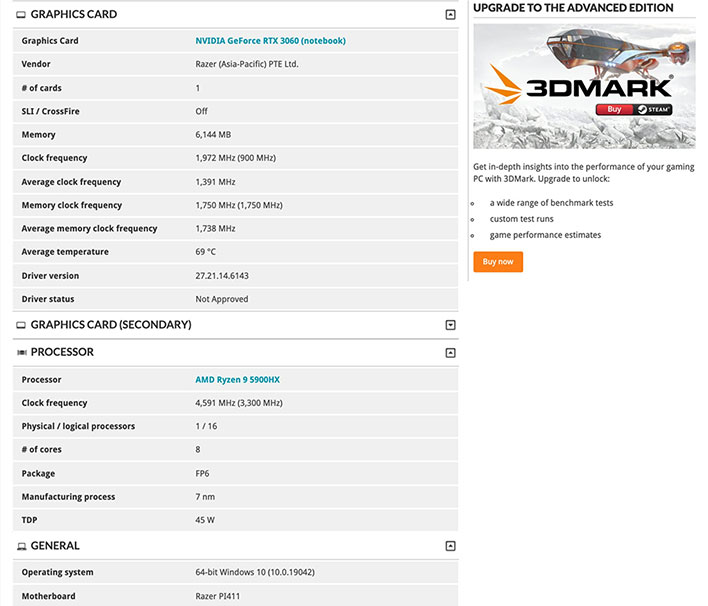 The second listing (which we've cropped—click to enlarge for the full entry) showcases a separate Razer PI411 configuration with the same Zen 3 processor, but paired with a mobile GeForce RTX 3060. It also sports 16GB of DDR4-3200 RAM and a 512GB M.2 NVMe SSD. Other RAM and storage options will undoubtedly be offered, if this setup comes to fruition.
According to the benchmark entry, the GeForce RTX 3060 inside this laptop is also set at 80W, with a 900MHz base clock and the memory running at 1,750MHz. Though the power envelope is the same, this suggests a full-power (Max-P) variant, as the Max-Q design on the GeForce RTX 3060 is actually set at 60W.
It scored 7,305, which is pretty decent, based on our collection of Time Spy scores. You can check out our most recent data in our Alienware m15 R4 review, but to the point, a 7,305 score puts this in the mix with laptops outfitted with a GeForce RTX 2070 and the GeForce RTX 2080 Max-Q.

Hopefully this means Razer is close to launching a new or refreshed laptop line with AMD inside, but until there is an actual announcement, this stays in rumor territory.