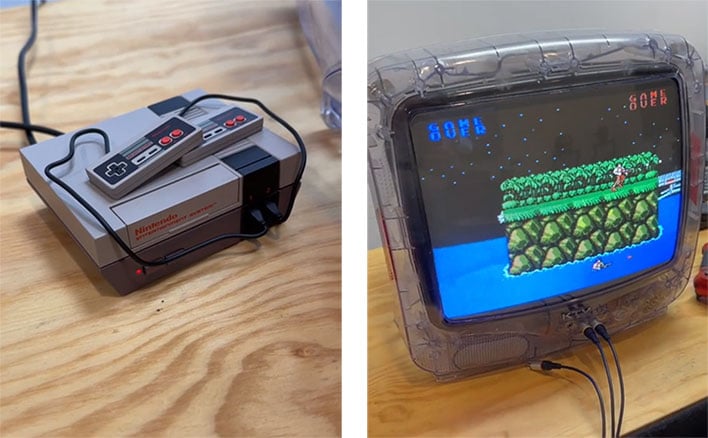 Hallmark sells a rather nifty Nintendo Entertainment System (NES) Christmas tree ornament, complete with sound and lights—pressing the power button triggers the lighting and plays sounds from the classic Super Mario Bros. game. But what happens when you pair the ornament with a Raspberry Pi Zero? You get a working retro console!
We have seen some neat mods with Raspberry Pi Zero, and have even done some ourselves. A couple years ago, for example, our own Marco Chiappetta showed how to build a Commodore 64 with a Raspberry Pi Zero, for under $50. It's a small board—half the size of a Raspberry Pi Model A+—yet capable, with a 1GHz single-core CPU, 512MB of RAM, mini HDMI port, composite video and reset headers, and more.
It is one of several mini PC boards offered by The Raspberry Pi Foundation, which has led to a wealth of mods, liking infusing a Game Boy with Raspberry Pi filling for retro gaming goodness. Reddit user RETROCUTION had a bit of a different idea, though. Instead of a Commodore 64 or Game Boy, he took the NES Christmas ornament and attached it to a Raspberry Pi Zero, to turn it into a retro gaming console.

I turned my NES Christmas ornament into a working gaming console! from r/RetroPie

Of course, for as small as the Raspberry Pi Zero is—it measures 65mm long by 30mm wide—it does not seem to be so tiny that could it could fit inside the NES ornament. However, the user claims it does, and has promised to upload pics soon. We are looking forward to those. In the meantime, we can see cables extending from the ornament and off the desk.

Either way, you work with what you got, and what RETROCUTION had was a tiny ornament, a Raspberry Pi Zero, and a neat idea. The modded ornament is connected to a CRT "prison TV" manufactured in February 2008 by a company called KTF (model number 13CLR-AT). As for the controls, the user says they are using a DualShock 4 controller via Bluetooth.
Assuming this is real—the user has a solid track history of Raspberry Pi mods on Reddit—it is quite the nice little project, and our hats are off to the user.