There's a new version of Raspberry Pi OS that rolled out earlier this week, and with it comes an upgraded foundation to Debian 11, otherwise known as Bullseye (named after Woody's horse in Toy Story 2). It brings quite a few under-the-hood goodies, but the biggest reason to upgrade is a feature that slipped under the radar initially—a faster turbo clock.

In a follow-up blog post, Raspberry Pi Foundation's Eben Upton confirmed that the speed increases some Raspberry Pi 4 owners saw were in fact intended to be there. And we're not talking about a tiny speed jump, either. The latest version of Raspberry Pi OS cranks the default boost clock from 1.5GHz to 1.8GHz on "recent" Raspberry Pi 4 boards, netting owners a 300MHz bonus gain at the high end.
By "recent," Upton is referring to any Raspberry Pi 4 model with 8GB of RAM, or 4GB and 2GB variants with extra components, as circled in this photo... 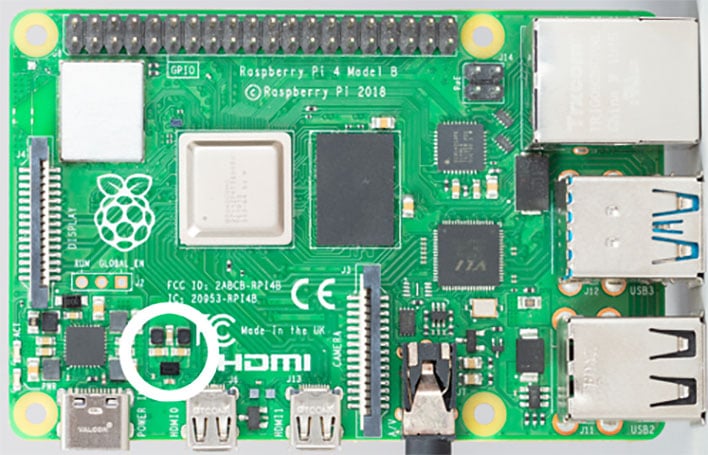 Those pieces represent the dedicated switch-mode power supply (or switcher) for the system-on-chip's core voltage rail.
"Through extensive testing on the production line, we have qualified an operating voltage for 1.8GHz, and satisfied ourselves that the new switcher is able to supply enough current to run even the heaviest workloads at that speed," Upton says.
Owners of older Raspberry Pi models are not necessarily out of luck. Part of it comes down to luck of the draw, or the silicon lottery, if you will. Upton notes that launch-variant Raspberry Pi 4 boards are generally good oveclockers, and can run a lot of workloads north of 1.5GHz when a little bit of extra voltage is applied. The firmware in the Bullseye update "will even do its best to figure out the best voltage" for your board, for any given overclock.
He also says you can manually replicate the new operating point on an older board by adding arm_freq=1800 to the config.txt file. Just be aware that this could introduce instability, and make SD cards temporally unable to boot. If you run into that, he suggests backing off in 50MHz increments (so for example you'd edit the line to arm_freq=1750).