It took a little bit longer than originally planned, but Raspberry Pi OS has received a major version upgrade to Debian 11, otherwise known as Bullseye. This is part of the two-year upgrade cycle for the Raspberry Pi OS, which prior to this point was based on Debian 10, otherwise known as Buster. Bullseye came out in August of this year.
Excuse our thumbnail image on our homepage, as we're well aware the codename Bullseye actually has nothing to do with darts. Debian names its builds after characters from Disney's and Pixar's Toy Story franchise, such as Buzz (Debian 1.1), Woody (Debian 3.0), and Jessie (Debian 8), to name a few examples. Bullseye (Debian 11) is the name of Woody's horse from Toy Story 2.
So with this latest release, Raspberry Pi OS gallops to Bullseye with "relatively few major changes [that] are visible to users," though quite a few under-the-hood tweaks and "significant changes to the desktop environment and to the support for Raspberry Pi hardware."
The biggest change is support for version 3 of the GTK+ user interface toolkit. This is a software layer that provides a graphical user interface (GUI) for widgets like buttons, menus, and so forth. Most desktop apps have, up to this point, used version 2 but as an increasing number have begun leveraging version 3, the Raspberry Pi Foundation felt it was time to make the switch.
It sounds like this wasn't necessarily an easy decision. In a blog post, Raspberry Pi Foundation's Simon Long explains that many thing are simply easier to do with version 2, especially as it pertains to customizing the look of widgets. He also notes that version 3 removed several user features, necessitating certain tweaks, like the new appearance of tabbed interfaces for widgets.

"Some other controls have a slightly different appearance, but we’ve tried to make sure that everything still looks familiar and largely unchanged. GTK+3 just gives us a more modern basis for future development, and brings us into line with other Linux desktop environments," Long says. 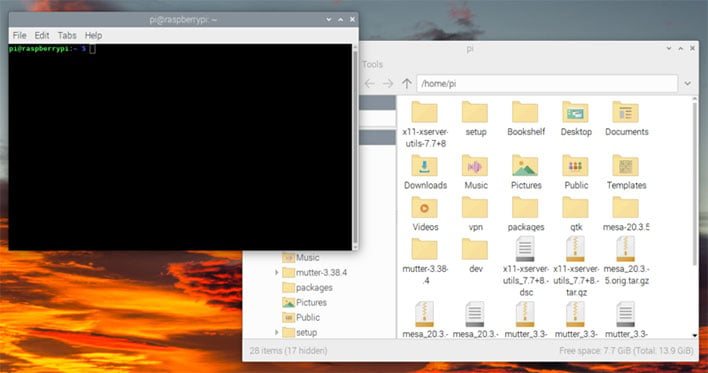 The move to GTK+3 also prompted a new window manager called mutter, which replaces the openbox window manager from prior releases. This draws the title bar and window frame around each application window and is capable of "some nice visual effects," like rounded corners, shaded borders, and opening and closing animations. It's a little more demanding, though, requiring at least 2GB of RAM. On Raspberry Pi models with less than 2GB of RAM, the older openbox window manager is still used.
Some other changes include the addition of a common notification manager to the taskbar (this can be by the taskbar and any of its plugins, as well as accessed via other applications), a new updater plugin, a simplified view of the file manager, a new camera driver with "less closed-source proprietary code," and a few other odds and ends.
Long says anyone looking to upgrade Raspberry Pi OS to Bullseye is highly advised to download a new image and reinstall any applications.
"Debian major version upgrades contain a lot of changes, and it is very easy for some small tweak made somewhere in the system to be incompatible with some change you have made, and you can end up with a broken system and a Raspberry Pi that won’t boot," Long warns.
You can download the Raspberry Pi Imager tool or grab the new image and use a tool like Etcher to flash it to a new SD card.