Raspberry Pi devices are incredibly useful and can be augmented with additional technology to make them fit for numerous use cases. Back in 2018, the Raspberry Pi team announced a Hardware Attached on Top (HAT) that enabled the Raspberry Pi 3B+ to be powered by power over ethernet (PoE). This allowed Raspberry Pis to go wherever there was a PoE-capable network. Now, the company is releasing a new PoE+ HAT that delivers more power, runs cooler, and keeps the same low price of $20.

The primary feature of the new PoE+ HAT that people will be most excited about is the capability for increased power delivery. The original PoE HAT was only able to deliver at maximum 15.4W to the Raspberry Pi, which is plenty if you are only power the device alone. However, if there were some power-hungry USB devices or other attachments at the same time, there was no guarantee they would work. To solve this, the PoE+ HAT uses the 802.3at standard, which, with a compatible switch or PoE injector, can deliver up to 25W to the Pi and peripherals. 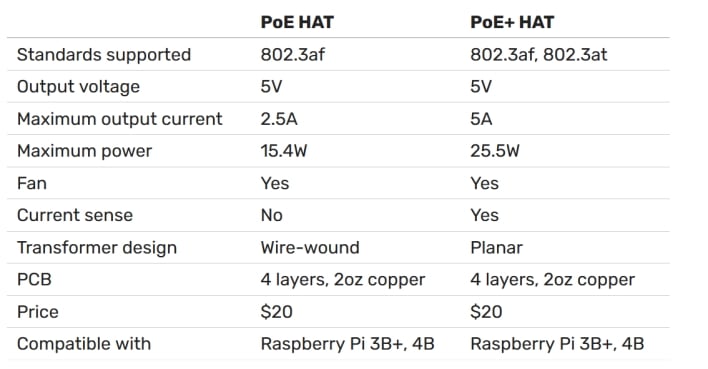 Besides this primary change, the diode rectifier has been replaced with an “ideal diode” rectifier to keep energy flowing in one direction as well as convert AC electricity to DC at lower temperatures. Furthermore, the PoE+ HAT gets a planar transformer which is a lower profile way to provide voltage conversion.

Interestingly, the PoE+ HAT is not quite shipping yet, but it is available for preorder online. This decision was made because of the widely-covered semiconductor shortage which has caused some issues for Raspberry Pi, such as constraining the supply of the original PoE HAT. Thus, the company wants to give industrial customers the chance to consider migrating to the new PoE+ HAT which does not have as much of a supply issue as the original. In any case, if you want to pick one of these up for yourself, you can preorder one now at any of Raspberry Pi’s authorized resellers.